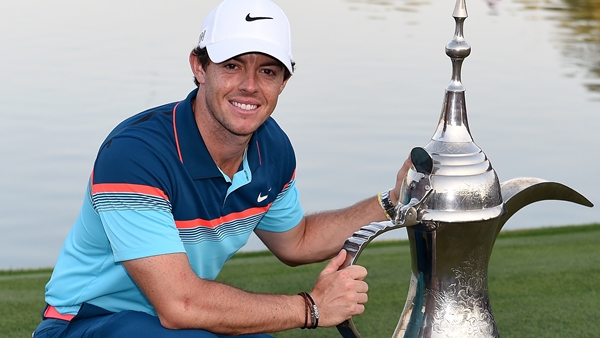 DUBAI, United Arab Emirates – An unrelenting Rory McIlroy secured his second Dubai Desert Classic title in six years with a 2-under 70 in the final round to win by three shots on Sunday.

The Northern Irishman’s 22-under 266 total matched the lowest in the history of the tournament, set by Stephen Gallacher in 2013 and Thomas Bjorn in 2001.

The top-ranked McIlroy, whose win here in 2009 was his first as a professional, made just three birdies Sunday but kept the mistakes off his card. His only bogey of the round came on the par-3 seventh hole at Emirates Golf Club’s Majlis course.

Sweden’s Alexander Noren, making a comeback this season from a wrist injury, had eight birdies in his round of 65 to take second place at 19 under.

Gallacher closed with a 69 to give the Scot third place with 16-under 272.

The $2.5 million tournament forms the closing leg of the three-stop Desert Swing of the European Tour.