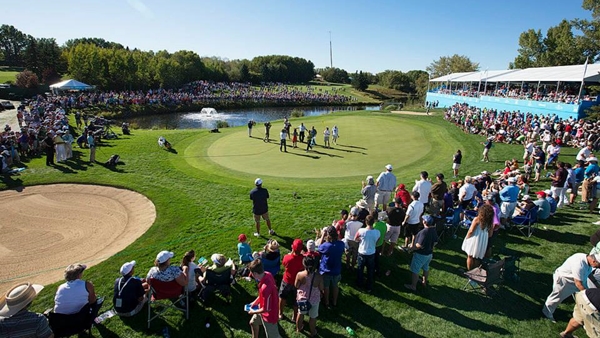 CALGARY—Rocco Mediate has confirmed he will be back in Calgary this summer to try and successfully defend his Shaw Charity Classic title, but he will have to knock off two of the biggest names on the the Champions Tour if he wants to hold the trophy for the second straight year.

Mediate, who ran away with the inaugural tournament last August, will return to Calgary with 2013 Charles Schwab Cup winner, Kenny Perry, along with 1989 British Open winner, Mark Calcavecchia. The trio lead what promises to be a star-studded field for the second annual event, August 27-31, 2014 at Canyon Meadows Golf and Country Club. Both Perry and Calcavecchia originally committed to play in the inaugural event, but were forced to withdraw due to injury.

“I always said I would bet all of the guys will be here next year,” said Mediate. “A sales pitch is really not necessary because that first year event created a huge buzz in the locker room. Everybody loved the golf course. And the turnout was probably the best of the year outside the U.S. (Senior) Open. All of the players loved it. How could you not?”

Mediate’s two wins including his seven-shot runaway victory at Canyon Meadows Golf and Country Club earned him the 2013 Rookie-of-the-Year honours on the Champions Tour. His impressive display of golf in Calgary tied the lowest 54-hole total at 22-under-par 191 on the senior circuit.

A 14-time winner on the PGA Tour, Kenny Perry took home the Player-of-the-Year award on the Champions Tour thanks to his three victories in 2013, including the U.S. Senior Open and Constellation Senior Players Championship. Perry’s stellar play throughout the season helped him claim the prestigious season-long Charles Schwab Cup. Perry has five wins while teeing it up against some of the greatest names in the game 50 and over.

One of the most colourful characters on the Champions Tour, Mark Calcavecchia, rounds out the first trio of players committed to make the trip to the Stampede City this summer. A 13-time winner on the PGA Tour, Calcavecchia has a special place in his heart for Canada. In addition to winning the 2005 Canadian Open and the 1997 Greater Vancouver Open, one of his two Champions Tour victories came in 2012 at the Montreal Championship. Calcavecchia is a four-time member of the U.S.A. Ryder Cup Team.

Tournament officials made the player announcement with the Shaw Charity Classic Patron Group, including PGA Tour professional Stephen Ames, while hosting corporate Calgary and media for an event coined “Augusta with Ames” – an exclusive Masters celebration, presented by the Calgary Sport Tourism Authority.

“The Masters Tournament unofficially signifies the start of the golf season in Calgary, and I can’t think of a better way to celebrate this great week on the golf calendar than by kicking off our marketing and sales efforts with three of the greatest names in the game,” said Sean Van Kesteren, tournament director, Shaw Charity Classic.

Van Kesteren and his team leveraged an interactive Masters session with Ames to highlight the breadth of hosting and participation opportunities available to golf enthusiasts at this year’s Shaw Charity Classic, including Pro-Am spots, corporate tents, and sponsorship opportunities at all levels.

“The goal of the Shaw Charity Classic is to provide Calgarians with the opportunity to witness elite golf while raising money to support children’s charities in southern Alberta. Having these three impressive names express their intent to play this early reinforces the commitment of the patron group, our title sponsor Shaw, and the Canyon Meadows Golf and Country Club to build on our foundation year and ensure this evolves into the most successful event on Tour.”

The inaugural Shaw Charity Classic, which was recognized with an Outstanding Achievement Award for a first year event by the PGA Tour, made a record-setting charitable donation of $2,276, 251 for a Champions Tour event.  The legends of the game will play for a purse of $2.25 million, an increase of $250,000 from last year, when they return to Calgary’s Canyon Meadows Golf and Country Club for the 2014, August 27-31.

Tickets for the Shaw Charity Classic are available online at www.shawcharityclassic.com. Youth 17 and under are admitted free with a ticketed adult.