A memorable journey for Mark Ahrens 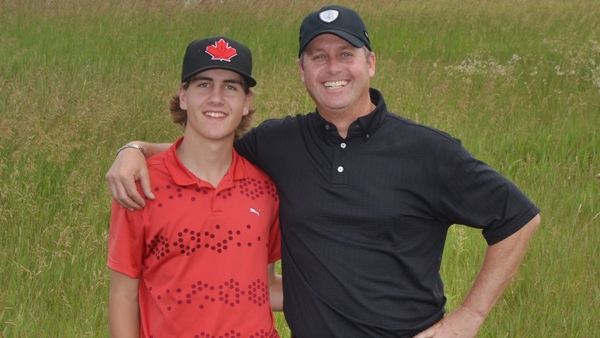 From being Rookie of the Year at Ferris State College in 1985 to being honoured as PGA of Ontario Golf Professional of the Year for 2013, it’s been a memorable journey for Mark Ahrens.

As a kid from Toronto, Ahrens started playing junior golf with his brother Brian at the Donalda Club, where his parents Lyle and Heidi and Brian remain active members. It was during this time Mark picked up a passion for the game that set him on a course to become recognized as one of the province`s premier golf professionals.

“It’s a true honour to be recognized by the PGA of Ontario as the Golf Professional of the Year,” says Ahrens who is looking forward to this 16th season as Head Professional at Kawartha Golf & Country Club in Peterborough. “This past year started off with a great win at the PGA of Ontario Tournament of Champions with our members Marc Savard and Marilyn Self. Then I had an opportunity to play in the PGA TOUR Canada Wildfire Invitational, which was an awesome experience that I was able to share with my family and my two boys were able to play in the pro-am. To close out the year with this award is very gratifying, to me it’s for more than just one year, it’s being recognized for the hard work and dedication to the game over the years.”

He spent two years as the Head Professional at Tam O`Shanter GC in Toronto before applying for the position at Kawartha, to replace Al Hosick, who was the club’s Head Professional from 1968 to 1998 and was the PGA of Ontario Club Professional of the Year in 1987.

The move to Peterborough turned out to be perfect for Mark and his wife B.A. as they started to raise a young family. Truth be told, golf is a family affair in the Ahrens household. B.A. looks after the golf shop books, works in the shop on men’s night, plays with the ladies on ladies’ night, helps out with the merchandising and fills in where needed. Their two boys learned the game at an early age at Kawartha and it`s in their blood. Ryan, 16, is working with PGA of Canada Master Professional Henry Brunton and is hopeful of a golf scholarship, while Mitchell, 18 is currently in his first year of the PGM Program at Georgian College.

As for the secret behind his success at Kawartha, Ahrens says being there when needed, being part of the fabric of the club and providing a first-class member experience is essential to longevity at a club for a head professional. It`s also about connecting with the 630 members and their families on a personal level. Kawartha has consistently had one of the top junior programs in the province average in excess of 100 youngsters per year and 2013 was no different with 120 signed up for leagues, programs and clinics.

“Mark has transformed Kawartha into one of the best serviced clubs anywhere in the country, says Ian Webb, Executive Professional at Credit Valley G&CC. “Mark leads by example; he is an astute businessman as his golf shop consistently parallels big city clubs in sales and service. He represents the best of what the PGA has to offer in professionalism, integrity and enthusiasm for the game.

Ahrens has also mentored close to 15 up-and-coming PGA of Ontario members who have passed through his shop over the years.

“Mark’s conduct and level of involvement at our Club and in the community is the envy of other area Clubs. He provides constructive input when asked and attends all Golf committee meetings; it’s important to him. He has instilled his qualities and approach to customer service in all of his staff from his assistant professionals to his back shop staff. Mark Ahrens is a person that doesn’t just wear the title Professional, he lives it,” says Tom Waudby, President, Kawartha G&CC.