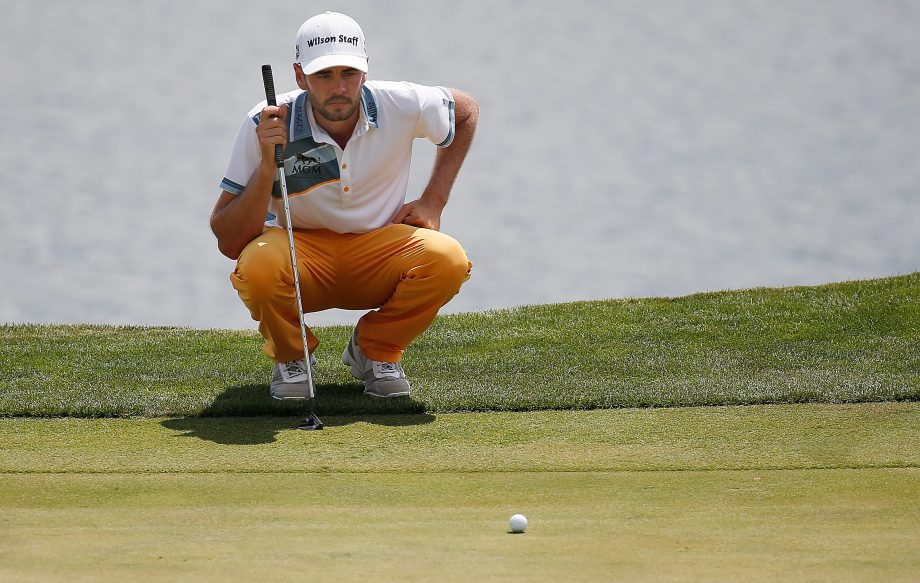 Merritt shot a tournament-record 10-under 61 to top the leaderboard even before the leading contenders teed off. It held up, too, as several players made runs at joining him at 14 under, but only Kevin Chappell, another veteran seeking a breakthrough victory, didn’t fade in the searing heat at Robert Trent Jones Golf Club.

Woods, who seemed to signal a return to contending golf Friday with a 66 that moved him within three strokes of the lead, was errant off the tee early and had several birdie putts slide by the hole.

While Merritt had 11 birdies and a bogey on the par-5 eighth, Woods didn’t make his first birdie until a 17-foot putt dropped on the par-4 15th. He hit his tee shot on the 187-yard 16th to inches, flashing a huge smile on the tee box, and then made a bogey at the par-4 18th to finish with a 74. He’ll start Sunday nine shots back.

“I was waiting for the one moment, the one shot. I couldn’t find it,” Woods said, adding that after starting with seven consecutive pars, he thought it might come at the par-5 eighth when his tee shot finally found the fairway.

Instead, his 3-wood approach sailed over the green and he made a bogey.

“I was dead back there, compounding the problem,” he said.

Merritt had long since finished and went into the final round as the leader for the second time this season. He had the lead to himself after the second and third rounds of the RBC Heritage, but finished third.

Merritt had missed five consecutive cuts coming into the week.

“The big thing is we put ourselves into contention for tomorrow and that was the goal,” he said. “I wanted to have a good week this week and I’ve been taking weekends off for two months now.”

Chappell wasn’t as spectacular, but started the day tied for third and more than kept pace with the field.

“You know, I’ve done a really good job of functioning this week,” he said. “‘That’s the grass. That’s the sky. That’s the hole. That’s my ball.’ Shoot the lowest score tomorrow and I win the golf tournament.”

Fowler, starting in the group ahead of the last two, has already won The Players Championship and the Scottish Open this year and hopes to give the leaders something to think about as quickly as possible.

“I’m looking forward to being out in front and making some noise, see if we can chase the guys down early and get things going,” he said.

Charles Howell III, playing with Woods, followed his near-ace at 16 by knocking his tee shot just to just inches, giving them both tap-in birdies, but with larger implications for Howell; the 15-year pro is seeking his first victory since the 2007 Nissan Open.

“I made some birdies and they’re out there,” Howell said. “Got to keep the pedal down tomorrow.”

There was no shortage of players making big moves attacking soft greens and with no wind.

Carl Pettersson and Bill Haas shot 64s to move to 11 under, and Vaughn Taylor had a wild day with 10 birdies and three bogeys in another 64 that moved him into a tie for 15th at 9 under.

No one took greater advantage that Merritt, seeking his first victory in 96 career starts.

He started with five consecutive birdies and six in the first seven holes, and had four birdies in a row and five in six holes in another stretch on the back nine. He closed with a par on the par-4 18th.

Starting fast isn’t unusual, Merritt said, but sustaining it has been challenging.

Defending champion Justin Rose shot a 65 and was among four tied at 11 under. With conditions expected to be similar in the final round, “It’s going to take something I would imagine in the realm of 63” to win, Rose said.

Canadian Adam Hadwin sits at 7-under for the tournament, tied for 21st place after a third-round of 69. Nick Taylor signed for 1-over 72.