Mickelson gets another day off at Ryder Cup in Europe 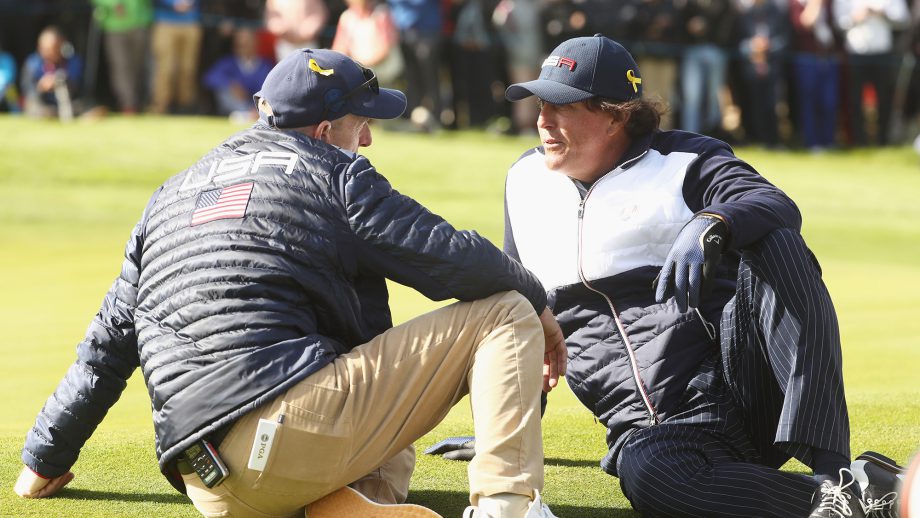 SAINT-QUENTIN-EN-YVELINES, France – Phil Mickelson is used to being a spectator when the Ryder Cup comes to Europe.

In a repeat of four years ago, Mickelson didn’t play at all Saturday at Le Golf National, reduced to a role of cheerleader and occasional coach while the rest of the team got on the course for at least one session.

Mickelson wasn’t happy with his omission in Gleneagles, ripping into captain Tom Watson after the Sunday singles finished off Europe’s 16 1/2-11 1/2 triumph.

The leader of this team, Jim Furyk, said Mickelson was more understanding about getting left on the sideline. He was out cheering during the afternoon foursomes, even allowing his teammates to rub his belly for good luck.

“Phil is a really good friend,” Furyk said. “We talked earlier this week about his play and how he was playing and his opportunities for play this week. He fully understood the role that he had today. Gave me a pat on the back and put his arm around me … (and) we had a great conversation. He said he would be ready tomorrow.”

Mickelson lost his only match Friday, dropping his career Ryder Cup record to 18-21-7. He has the most losses than any player in U.S. history, though Tiger Woods is now only one behind after three straight defeats in France.

Mickelson went out to practice Saturday morning, hopeful of getting another shot at playing the afternoon. But Furyk texted him about the time the pairings were submitted, letting him know he would be sitting out again.

Furyk conceded that he expected Mickelson to play more at the beginning of the week. But he’s struggled with his driving, and a poor showing Friday led the captain to go a different way.

But Furyk said Mickelson is still an asset to the team, even when he’s not playing.

“You’ve got him in your team room,” Furyk said. “He’s funny, he’s sarcastic, witty, likes to poke fun at people, and he’s a great guy to have in the team room. I think the younger players had fun having a go at him as well this week, which was fun to see. He provides a lot more than just play.

“I know Phil. He wants to be out there just like everyone else. That’s part of being a team and part of this event. We have 12 amazing players, and they can’t all play every match, and you accept what you get.”

Lefty will be back on the course one more time for singles matches Sunday, facing one of the hottest European players, Francesco Molinari. The British Open champion teamed with Tommy Fleetwood to win all four of their matches, propelling Europe to a 10-6 edge heading to the final day.

Furyk is counting on the 48-year-old Mickelson to give the Americans a boost at the back end of the singles draw. He’ll be playing in the ninth of 12 matches.

“I hope that our guys get off to a fast start and put him in that position,” the captain said.

Jordan Spieth and Justin Thomas won both their matches Saturday, both at the expense of Ian Poulter, who has built his reputation at these matches. Poulter’s signature move is to pound the Ryder Cup crest on his chest with his fist.

Spieth had the final word.

When he made birdie on the 15th hole to close out Poulter and Rory McIlroy in fourballs, he pounded his chest four times.

“He pounded his chest earlier on us today, so I was waiting for the right moment, and I think to win the match this afternoon felt like the right time,” Spieth said. “Clearly, we’re down four points, so in the scheme of things, we shouldn’t necessarily be celebrating. But for us two to get that point and the way that we played today and the battle that we had with those guys both matches, it was emotional.”

Spieth has one TV memory of Poulter, from the 2012 matches at Medinah. Poulter is most famous for making birdie on the last five holes to win the last team match Saturday evening. He pounded his chest because of the raw emotion, and Europe rode the momentum to rally from a 10-6 deficit the next day.

A taunt from a spectator beside the third green prompted an aggressive response from Rory McIlroy.

After rolling in an 8-foot putt for birdie to halve the hole with Ian Poulter against Jordan Spieth and Justin Thomas in the foursomes, McIlroy reacted by turning to the crowd and seemingly picking out one spectator in particular.

“Who can’t putt?” McIlroy shouted, before tapping his chest. “I can putt. I can putt.”

As he spun to pick the ball out of the cup, McIlroy uttered some more words.

European captain Thomas Bjorn said he was unaware of the incident.

“If it was a big problem for Rory,” Bjorn said, “he would have mentioned it to me.”

European captain Thomas Bjorn apparently picked the right four players for his team, even though three of them have not won a tournament this year.

Sergio Garcia, already a boost in the team room, teamed with rookie Alex Noren to split their two foursomes matches and with Rory McIlroy to win in fourballs. Henrik Stenson delivered the key putts in a foursomes victory with Justin Rose. Ian Poulter won a fourballs match Friday and gave a boost to McIlroy.

Add them up and his picks have contributed a combined six points.

As for Jim Furyk?

Tiger Woods is 0-3. Phil Mickelson lost his only match – he didn’t even play on Saturday. Bryson DeChambeau has lost foursomes matches while paired with Mickelson on Friday and Woods on Saturday. The only point came from Tony Finau – his final pick – in the opening match of the Ryder Cup.