Mickelson struggles with putter at US Open 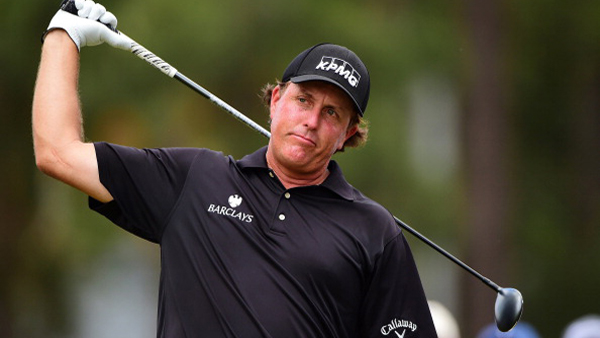 The six-time runner-up and zero-time champion slipped well off the pace Friday with a 73 that left him at 3 over – 13 strokes behind record-setting leader Martin Kaymer.

It’s mostly because of his putter.

After ditching the claw grip in favor of a more traditional one, Mickelson missed a series of putts that would have put him at least a little closer to Kaymer.

“The hole looks like a thimble to me right now,” Mickelson said. “I’m having a hard time finding it.”

Now, at a tournament where everybody’s seemingly playing for second, he’s facing quite a climb to claw back within striking distance on a Pinehurst No. 2 course that 15 years ago was the site of the first of his many second-place finishes.

Teenage playing partner Matthew Fitzpatrick called Mickelson “the master” of “getting out of trouble” and that ability certainly will be put to the test this weekend.

“I feel like I’m playing well enough to win the U.S. Open,” Mickelson said. “Except for putting.”

Mickelson has been saying his putting could use some tweaking. He’s 100th among PGA Tour players in total putting this year after finishing 11th in that stat in 2013.

So in an attempt to get his stroke back, he switched to a claw grip for the Open.

Even after he shot even par during the first round, he said he wasn’t sure how long he’d stick with it.

“I felt like I identified what I was struggling with, and I thought it was my eye line had gotten well over the golf ball,” Mickelson said. “So as I moved the ball away and put my eyes over the ball instead of over the top, I felt like that’s how I putted last year, so I went back to my regular grip.”

Reverting back to the conventional grip for Round 2, Mickelson got off to an encouraging start with birdies on consecutive early holes.

Then came the pesky par-3 sixth that “shook me a little bit.”

Mickelson plopped his tee shot onto the green, but three-putted for a four after his short par attempt hugged the lip of the cup before spinning out.

Two holes later, he pushed his short putt wide left and settled for bogey – the second straight day he bogeyed both holes.

“After that,” he said, “I was really fighting it.”

He added bogeys on two holes he birdied a day earlier – on the par-5 10th, and on the 14th after spinning another short par putt around the lip of the cup.

He ended his round by missing an 11-foot par putt on the 18th and tapping in for his fifth bogey.

“Whenever you putt well and you make short ones and you make those 5-, 6-footers and you’re running a couple of 20-footers in, the game feels easy,” Mickelson said. “You don’t put pressure on yourself to hit it close. You can hit more of the middle of the greens. Your ball striking then becomes a lot easier. Your targets are a lot bigger.”

Because that hasn’t happened here yet, it sure looks like when Mickelson turns 44 on Monday, he’ll still be one victory shy of the career Grand Slam.

The three-time Masters champ, 2005 PGA Championship winner and 2013 British Open champion began his run of runner-ups at this course 15 years ago when it staged its first Open.

He was preparing for a playoff with the late Payne Stewart when Stewart sank a memorable 15-foot putt for par and the win – and a statue of Stewart in that moment stands just beyond the green on 18.

Mickelson led by a stroke heading into the last hole at Winged Foot in 2006 but finished with a double bogey. Last year, at Merion he led during the final round but finished two strokes behind Justin Rose.

But after the way his putter struggled in Round 2, second place doesn’t sound too bad.

Besides, he’s only seven strokes behind Brendon Todd for second.

“I’m not overly optimistic. Obviously I’m not in good position, but more than that … you can’t fire at a lot of the pins,” he said. “You’ve got to make 25-, 30-footers, I’m just not doing it. I’m not going to give up. You just never know. I’ve had rounds that kind of clicked. … Tomorrow, I need to shoot 6- or 7-under par to have a realistic chance.”