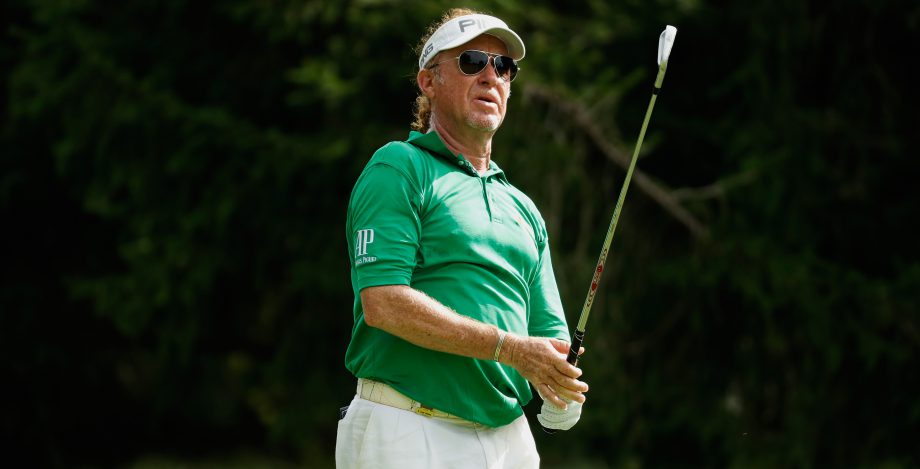 UPPER ARLINGTON, Ohio – Miguel Angel Jimenez handled gusty winds and shot a 1-under 69 Saturday to grab the lead after the third round of the U.S. Senior Open Championship.

Despite three bogeys on the windy back nine, the 52-year-old Spaniard finished as one of just four players under par for the day. He’s at 3-under 207 through 54 holes at Scioto Country Club in suburban Columbus.

Jimenez started the day three shots off the lead. After two birdies on the front nine, he birdied the 12th before carding bogeys on the 13th and 14th, a birdie on the 15th and another bogey on the 16th. He finished with a pair of pars just as sheets of driving rain rolled in.

“The conditions, they are tough today, especially because of the wind,” Jimenez said. “The greens were softer on the first two rounds, but it’s the gusting wind there that (makes it) not easy to choose the club, the right club. Sometimes it will go a place that you don’t (want) to, you know?”

Gene Sauers also battled the wind and had an up-and-down day with four birdies and five bogeys, finishing with a 71 to put him in second place, one stroke off the lead. He shot a 68 on Thursday and 69 Friday.

“The heat, the wind, the rain on the last hole – it was a brutal day,” said the 53-year-old Sauers, who has never won a senior tournament in five seasons but has 17 top-10 finishes.

Ian Woosnam, Loren Roberts and Billy Mayfair were in a tie for third at 1-over par.

The leader after Friday’s round, Joey Sindelar, shot at 77 Saturday and slipped to 2-over and into a tie for sixth place.

“Golf’s hard,” he said. “U.S. Open’s harder. And I thought for the most part, I was pretty happy with the way I played. It wasn’t horrible. Just a couple of uglies, and it played hard out there. Problem is, we’ve got a pretty good guy out there in the lead and a couple more really good ones right behind him.”

Jimenez finished in the top 10 in six of the seven senior events he’s played in this year, winning the Mississippi Gulf Resort Classic in April. He finished second at three others. He lost the 3M Championship in a playoff with Joe Durant, who made a double eagle on the first playoff hole.

As for Sunday, Jimenez said he’ll “just keep playing golf and give myself patience. That’s the main thing. Whatever happens happens.

“Of course,” he added, “you have to enjoy yourself.”

Calgary’s Stephen Ames holds a share of 15th at 4-over after carding a third-round 76, while St. Catharines, Ont., native Rod Spittle sits T51 at 12-over.