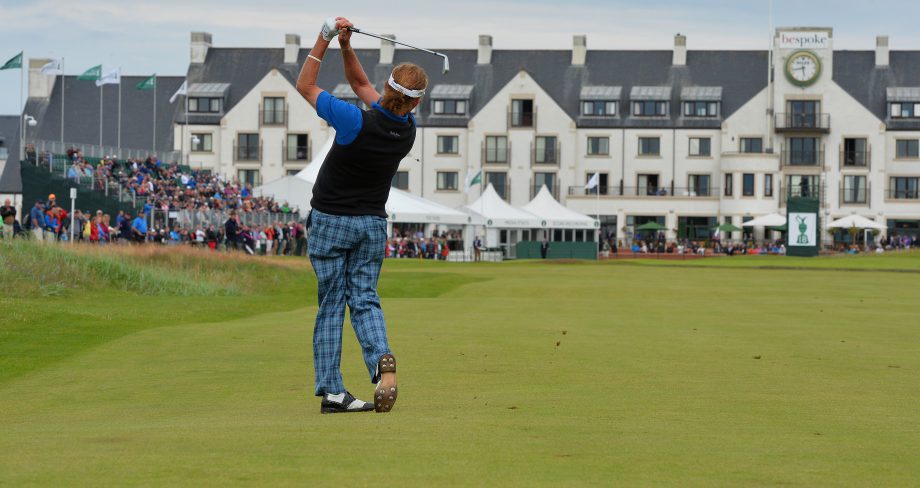 CARNOUSTIE, Scotland – Miguel Angel Jimenez opened a four-stroke lead in the Senior British Open, shooting a 7-under 65 on Saturday in mild conditions to fall one short of matching the Carnoustie Golf Links record.

The 52-year-old Spaniard had a bogey-free round in wind at 6-12 mph on the mostly cloudy afternoon. He had an 11-under 205 total after opening 70-70, putting him in position for his first major title.

“Tonight, I’m going to do exactly the same thing I did the previous night,” Jimenez said. “I go with my friends, we go to a nice diner with a nice bottle of Rioja and after that I’m going to have a bit, fat cigar with a nice malt whisky.”

Jimenez won in Mississippi in March for his third career PGA Tour Champions victory. He has 15 regular European Tour victories, the last in the 2014 Spanish Open at a tour-record 50 years, 133 days.

“Of course, I care,” Jimenez said. “I love what I do, and what I’ve done for the past 28 years. I want to do well, to be as relaxed as possible and do my best.”

“It was a very nice day on the golf course,” Jimenez. “I played very solid from tee to green. Everything was working perfectly today. I played the last two holes beautifully so I am happy with my day and the score, despite not making the last putt for a 64.”

“You don’t want to finish with a bogey so it’s nice to have dinner on a high rather than a low,” the Englishman said. “Miguel’s going to be the man to beat, without a doubt. I was hitting some good shots in the group ahead of him, and every time I turned around he had just hit it inside me.”

Durant slipped back after sharing the second-round lead with Kohki Idoki.

“I played horrible today, I really did,” Durant said. “My iron game was terrible. I just couldn’t figure it out. I tried about 20 different swing thoughts and just couldn’t zero it in for some reason. I just kept flaring everything out to the right. My sequencing was bad.”

Bernhard Langer was tied for 12th at 3 under after his third 71. He won the 2010 event at Carnoustie.

Idoki had a 77 to drop into a tie for 18th at 2 under. Defending champion Marco Dawson was tied for 68th at 9 over after a 78. He won last year at Sunningdale.