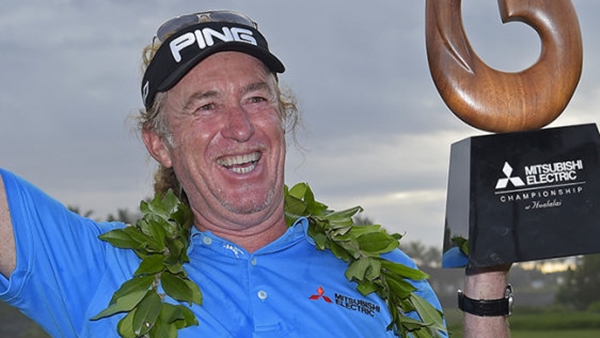 The Spaniard closed with a 6-under 66 for his second victory in three career starts on the 50-and-over tour. He broke a tie with O’Meara with a 20-foot birdie putt on the par-3 17th.

“It was uphill against the grain and into the wind,” said Jimenez, a 21-time winner on the European Tour. “I knew I had to hit it hard.”

Jimenez won the Greater Gwinnett Championship last year, a week after finishing fourth in the Masters. In his other Champions Tour start, he tied for eighth in the Senior British Open in July. In May, he won the Spanish Open at 50 years, 133 days to break his own record as the oldest European Tour champion.

“People remember the winner, not second place,” O’Meara said. “I’m disappointed, but Miguel played well when he had to.”

Fred Couples was third at 14 under, following his second-round 64 with a 66. Rocco Mediate, tied with Jimenez for the second-round lead, had a 70 to finish fourth at 13 under.

The 40-player field featured major champions from the last five years, other tournament winners in the last two seasons and sponsor invitees.