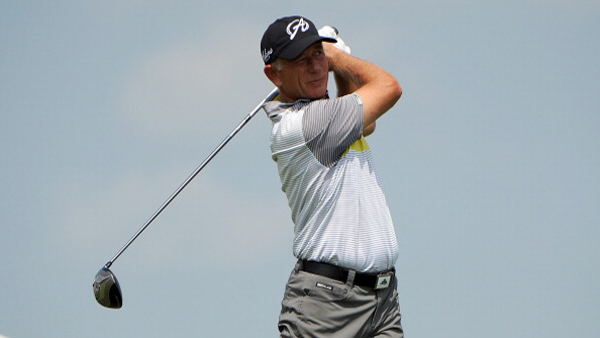 SNOQUALMIE, Wash. – Mike Goodes shot an 8-under 64 on Friday for a one-stroke lead in the Boeing Classic.

Goodes, 57, got off to a fast start with an eagle on the first hole, knocking it in from a bunker. He then had six birdies in the first round of the Champions Tour stop at TPC Snoqualmie Ridge.

Goodes, who maintained his amateur status until joining the Champions Tour in 2007, is looking for his second career win to go with the 2009 Allianz Championship. The last time he led any round in any tournament was the 2013 Insperity Open in Houston.

“I’m dying to win,” Goodes said. “That doesn’t necessary mean you will but I’d love to win again. It would mean a lot.”

In the previous nine Boeing tournaments, no first-round leader has gone on to win the title.

Mark Brooks was all alone in second after a 65. The 1996 PGA champion shot a 6-under 30 on the back nine, one short of the course and tournament record of 29 set by Scott Simpson in 2006.

“When you do it as long as I have … you deserve occasionally to have a nine like that,” said Brooks, who won seven times on the PGA Tour but not since his PGA title.

Five players shot a 67, including Mark Calcavecchia. He shot a 5-under 31 on the front nine, matching the course record done 20 times, including by Calcavecchia in the opening round last year.

Goodes did not want to play on the PGA Tour. He ran a successful business and preferred to remain an amateur. He was convinced by his business partner and his wife to try the 50-over circuit in 2007. For his first two seasons, 2007 and 2008, he got into tournaments through the arduous Monday qualifying.

“I came really close to not doing it because I wasn’t sure it made sense for me to lose my amateur status to go chase Monday qualifiers,” he said. “But it’s been great.”

“The money’s great but I love competing, like most people, and to be able to compete against Fred Couples and Bernhard Langer and Fred Funk and Mark O’Meara, sometimes you beat on them and most of the time you lose to them, but to compete with them is living the dream,” Goodes said.

Langer, who has won three of the past five tournaments and is well ahead in the Charles Schwab Cup standings, shot a 2-under 70 and is tied for 22nd. It ended his streak of rounds in the 60s at 10 straight. His bogey on No. 2 also ended his bogey-free streak at 66 consecutive holes.

Couples, a local favorite, finished at 1-under 71. Defending champion John Riegger shot a 73.

One of the more interesting pairings featured three players who have shot a 59 in a PGA Tour-sanctioned event. Kevin Sutherland, the first Champions Tour player to shoot a 59 last week in the second round of the Dick’s Sporting Goods Open, joined Paul Goydos and Chip Beck. Those two are among the six to do it in a PGA event.