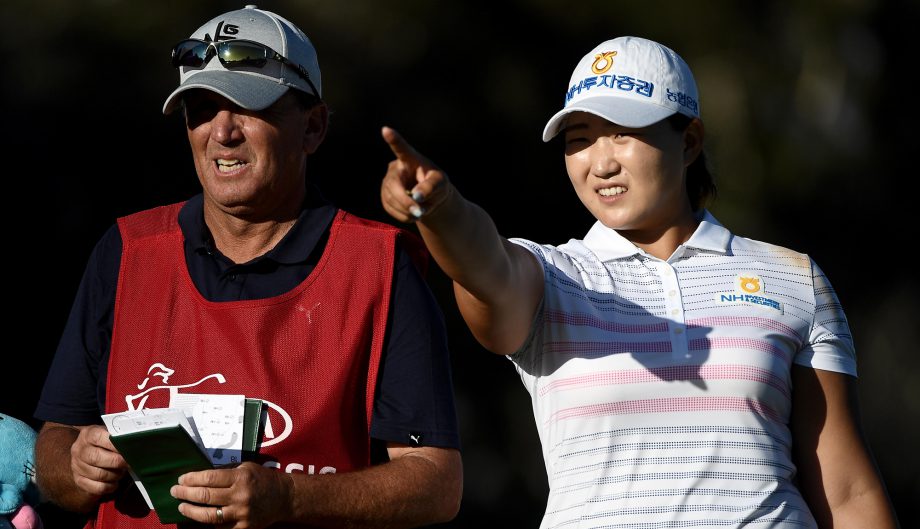 CARLSBAD, Calif. – Moving day at the Kia Classic set up what should be an exciting final 18 holes at Aviara on Sunday.

Another South Korean, In Gee Chun, was tied at 10-under with Cristie Kerr, who was in a three-way tie for the lead after the first round and was alone atop the leaderboard after 36 holes.

The most pressure Sunday might be on Kerr, the 2015 Kia champion.

Kerr had her most erratic round of the tournament, a 1-under 71 that ended with a bogey on 18.

“I like my position,” Kerr said. “Honestly, I didn’t hit it that great today. I scrambled a lot. That last pin was really difficult. It was kind of hard to judge the speed through the shadows, and I didn’t do a very good job. I three-putted the last hole.”

She said her coach flew in on Saturday, “so I get to go do a little session with him tonight. I’m going to go work with my coach and try to hit it a little better tomorrow and give myself more opportunities to make birdies.”

Hur was energized by her long putt on 18, which she thinks was the longest she’s ever made.

“I definitely feel very, very good right now because I finish with a birdie on the last hole,” she said. “That was a huge, long putt. That helps a lot, the last putt. It put me second place. I’m getting excited to be playing tomorrow.”

“I just want to stay positive and still be patient for those greens,” she said. “It actually was good today and my putter was good. I struggled a little bit with my iron shots.”

Brittany Lincicome made an early run with four birdies and an eagle in her first eight holes to get to 10-under before she had two bogeys on the back nine in a round of 67 that tied her with Austin Ernst and Karine Icher at 9-under. Calgary’s Jennifer Ha (76) was tied for 62nd at 1-over par.

In a group of five golfers at 8-under was Jackie Stoelting, who at 30 has earned, lost and earned back her tour card. After making the cut in an LPGA tournament for the first time since 2015, she got to 11-under through 10 holes before double-bogeying the par-4 13th and bogeying the 18th for a 70.

Two years ago at the Kia, she shot 4-under in the first round and 4-over in the second round and missed the cut by one.

“I’ve been in contention a lot on the Symetra Tour,” said Stoelting, who admitted getting nervous Saturday when the TV crew began following her.

“That really helped me settle down a little bit more, knowing that I’ve dealt with cameras before,” she said. “It’s definitely different out here. But I enjoy that feeling.”

She has only $10,398 in career LPGA earnings and is ranked 303 in the world. Her biggest paycheque has come via Big Break on the Golf Channel, when she won some $70,000 and other prizes.

Stoelting said she owes a lot to her clothing sponsor, 2GG Apparel, which is owned by former major league pitcher Russ Ortiz.

“We talked a lot last week just about playing fearless and just really believing in myself,” she said. “I think that’s the biggest difference this week.”