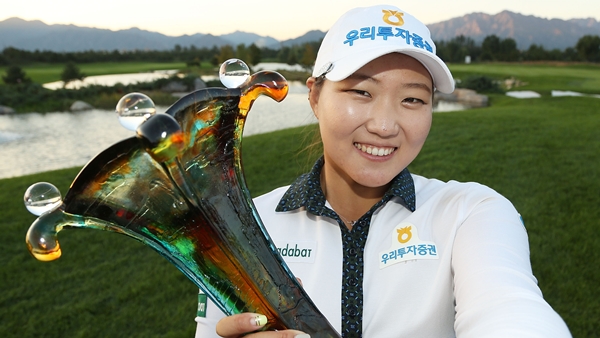 BEIJING – South Korea’s Mirim Lee won the second title of her rookie LPGA Tour season, shooting a 5-under 69 in the final round on Sunday to capture the Reignwood Classic by two strokes.

Starting the day tied for third, Lee birdied three holes on the front nine and added two more on No. 16 and 18 to offset one bogey. She finished at 15-under 277.

Lee’s first LPGA victory came just two months ago at the Meijer LPGA Classic, where she beat her third-ranked countrywoman Inbee Park in a playoff.

“I really didn’t think I would get my second win this quickly,” Lee said. “I was a lot more nervous this time than first time around.”

Hedwall, who was aiming for her first LPGA title, shot a 73 to finish second at 13 under.

“It was tougher out there today,” the Swede said. “I think most girls out there were struggling a little bit with the wind, because it’s a tough golf course in the wind.”

Lewis, meanwhile, started off her round with a birdie, but bogeyed No. 7 and added three more bogeys on the back nine to slip out of contention. She shot a 75 for equal sixth at 11 under.

Lee said she learned a lot playing in the final group with Lewis, who was aiming for her fourth title of the year.

“Usually when I play my rounds I don’t watch the other players,” she said. “Today I really observed how Stacy played, and she was such a phenomenal player. It shows why she is the No. 1 player in the world.”

Park shot a 71 to finish in a share of third with fellow South Korean Haeji Kang (69) and American Brittany Lang (72) at 12 under.