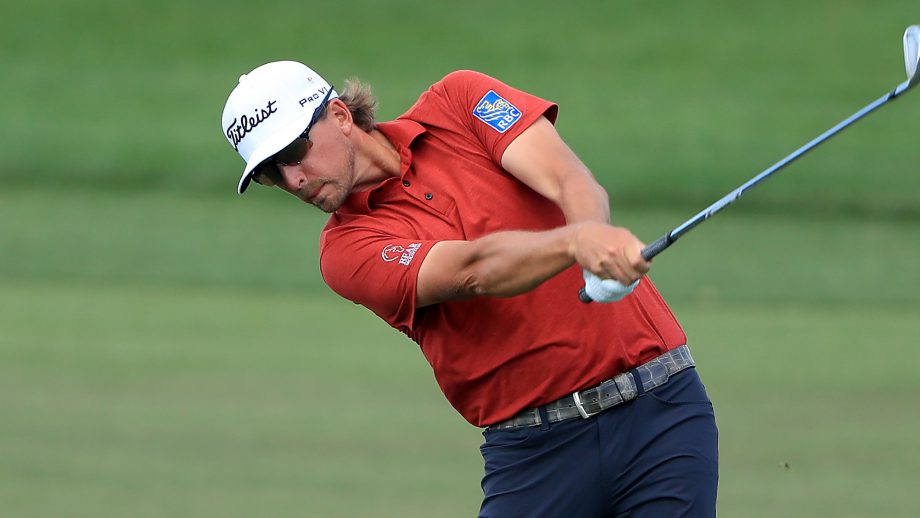 ORLANDO, Fla. – British Open champion Francesco Molinari delivered another big moment on the 18th green at Bay Hill, without wearing a red shirt and leaving the flag stick in the cup. His 45-foot birdie putt capped off an 8-under 64 to come from five shots behind Sunday and win the Arnold Palmer Invitational.

Molinari watched the birdie putt kiss off the pin and into the cup, and the normally reserved Italian raised his fist and hammered it down in celebration, knowing that would make him hard to beat.

He started so far back that Molinari finished nearly two hours before the round ended. It gave him a two-shot lead at 12-under 276, and no one got closer than two shots the rest of the way.

“To do it here at Arnie’s place, knowing my wife and kids are watching from home, it’s very special,” Molinari said.

He won for the fourth time in the last nine months, and in his first start since signing a new equipment deal.

Tiger Woods, who missed this week with a sore neck, has delivered so many birdie putts over the year on the 18th, usually to win and with Palmer on the side of the green waiting to congratulate him. Molinari’s was longer than anything Woods ever made, from a slightly different angle. But he knew the history from so many highlights.

“It’s a pretty iconic putt,” he said. “I’m pretty sure I’m the first guy to make it with the flag in, though, so that’s the real difference.”

The new Rules of Golf allow the flag to be left in for putts in the green, and most players leave it there on long putts.

“Obviously, you’re trying to lag it close to the hole and it came out on a great line and maybe a little firmer than I wanted, but the line was just right and incredible to see it going in,” he said. “I’ve seen so many putts on TV like that and to do it yourself it’s really amazing.”

Matt Fitzpatrick managed only two birdies in his round of 1-under 71 and made a 3-foot par putt to finish alone in second. Rory McIlroy started the final round one shot behind and never got anything going. He had two birdies, two bogeys and a 72 to tie for sixth.

Perhaps it was only fitting that the claret jug was at Bay Hill, which served as part of the Open Qualifying Series. Sung Kang also had a big putt on the 18th hole, this one from 12 feet for par that sewed up the third and final spot offered for the British Open at Royal Portrush this summer.

The other two spots went to Sungjae Im, the 20-year-old South Korean who closed with a 68 and tied for third; and Honda Classic winner Keith Mitchell, who made eight birdies in his final round of 66 to tie for sixth.

Tommy Fleetwood, who shared the 36-hole lead at Bay Hill, recovered from a 76 that knocked him out of contention by closing with a 68 to join Im at 9-under 279 along with Rafa Cabrera Bello (69).

“I was just trying to hit good shots, give myself chances,” Molinari said. “I knew it was not going to be easy. The course was firm and fast yesterday and I knew it wasn’t going to be easy for the guys in the lead, so I thought there was an outside chance. And yeah, just started making putts, one of my best putting rounds ever.”

It was another disappointment for McIlroy, who has played in the final group in three of his five PGA Tour events, and for the ninth time without winning dating to the start of 2018. He rallied from two back to win at Bay Hill a year ago.

This time, he was in good position just one shot behind Fitzpatrick. But after a 25-foot birdie putt on the third hole to briefly tie for the lead, McIlroy played the next 12 holes with two bogeys and 10 pars.

Fitzpatrick didn’t have much going, either. He regained the lead with a birdie on No. 4, un aware of all the action on the other side of the course.

No one got closer than one shot to him the rest of the day.

Molinari has four victories worldwide in his last 17 starts over the last nine months, and the Italian pointed to the first of those victories for sparking his turnaround. He played in the final round of the BMW PGA Championship at Wentworth tied with McIlroy, closed with a 68 and won by two.

“It’s hard to point a finger at one thing,” Molinari said. “I think obviously confidence has to do a lot with it. When I won last year, playing with Rory in the last few groups, it wasn’t easy at all. So from there I started building my confidence and just saying I could get it done.”

Molinari closed with a 62 to blow away the field in the Quicken Loans National. He played bogey-free on the final day at Carnoustie for his first major. He became the first European to win all five matches at the Ryder Cup. And he delivered a charge that was most appropriate on Palmer’s home course.

“I got everything out of it,” he said.