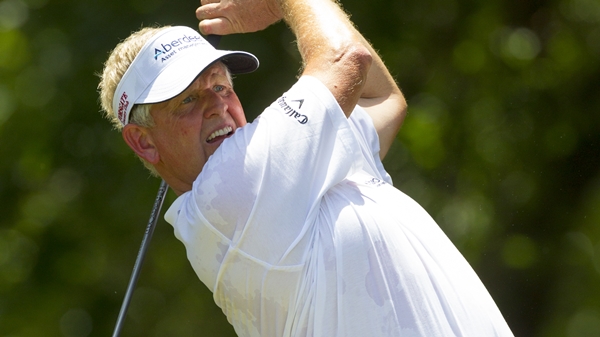 EDMOND, Okla. – Colin Montgomerie is getting used to winning these big events.

The Scotsman defeated Gene Sauers in a playoff to claim the U.S. Senior Open title Sunday at Oak Tree National.

The 51-year-old said he has become more patient with age.

“You have to play intelligent golf, and I think I’ve matured enough to realize that and play more within myself sometimes, including today – to play away from some pins so you don’t make bogies, and you realize that in major golf, pars are usually good enough, especially in the USGA events,” he said.

Montgomerie reached another milestone by winning his first professional playoff in nine tries. Most famously, he lost to Ernie Els at the 1994 U.S. Open and to Steve Elkington in sudden death at the 1995 PGA Championship.

On the 18th hole of regulation, Montgomerie parred, then waited. Sauers’ second shot landed about 10 feet from the hole, giving him a chance to win the tournament with a birdie. His putt lipped out, and he parred to force the playoff.

“I guess I just may have misread that putt the first time around, didn’t play enough break,” Sauers said. “Hit a good putt, broke right at the hole at the last second.”

Montgomerie led at the end of the first and second days of the Senior Open, but entered Sunday’s action four shots behind Sauers. He shot a 2-under 69 to force the playoff and now feels he is capable of playing just as well on the PGA Tour.

Montgomerie and Sauers entered the playoff at 5 under. Montgomerie entered the third extra hole with a one-shot lead, then sank a putt on 18 to par the hole and claim the win.

It was the first playoff at a U.S. Senior Open since 2002, when Don Pooley beat Tom Watson in a five-hole playoff. This one was held in temperatures that exceeded 100 degrees. Sauers often used a towel to wipe his face and at times rolled it and placed it on the back of his neck. Montgomerie’s face was red from the sun, and he carried a towel to the interview podium while still sweating well after he made his final putt.

“For my wife and three kids to be here is fantastic, and I’m just sorry for them,” Montgomerie said. “It was very hot for them to walk around. They had to walk 21 holes today. Eighteen is enough.”

David Frost and Woody Austin, making his Champions Tour debut, tied for third at 1 under. Jeff Sluman, Vijay Singh and Marco Dawson tied for fifth at even par.

Bernhard Langer, who was among the leaders for most of the tournament and entered the final day at 4 under, faltered on the back nine. He double bogeyed 16 and finished at 6 over for the day and 2 over for the tournament, tied for ninth.

Sauers’ performance was impressive, given his circumstances. He said a reaction to a wrongly prescribed medication several years ago caused Stevens-Johnson syndrome, a disorder that burned the skin on his arms and legs from the inside out. He got out of the hospital in June 2011 and eventually returned to the course.

Sauers hadn’t finished higher than 15th in a Champions Tour event this year, and hadn’t won an event of any kind since the 2002 Air Canada Championship on the PGA Tour. He has never won a major on the Champions or PGA tours, but he was thankful to be close.

The lone Canadian in the field was Rod Spittle. He finished tied for 49th at 13-over 297 after a 75 on Sunday.