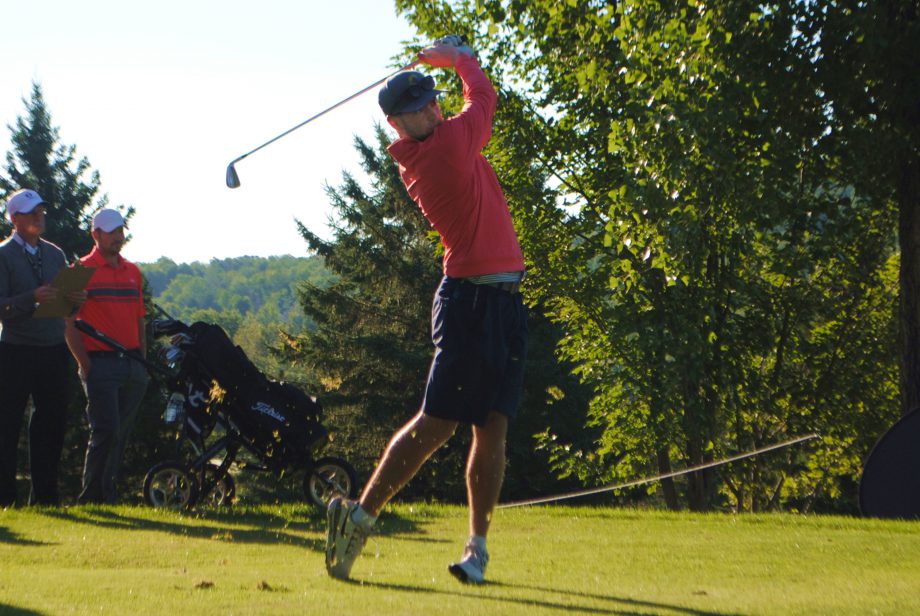 BROMONT, Que. – Clear skies and mountain winds at Golf Château-Bromont welcomed competitors to the first round of the 2016 Canadian Men’s Mid-Amateur Championship. At 5-under 67, Montréal’s Jacob Peterson holds a one-stroke lead alongside Jordan Irwin of Banff, Alta.

Peterson took off from the 10th tee with the morning wave and moved into quick possession of the lead with three birdies through holes 12 to 15 and an eagle on the par-5 17th.

“It was a pretty windy morning, but I managed pretty well,” said Peterson. “It honestly helped me at some points. I got some good breaks, I made some good putts and I holed-out from a bunker.”

The 25-year-old Concordia University Stinger, who is competing for the first time at this national championship, birdied No. 2, but settled for a bogey on the par-4 5th hole. A birdie on his final hole solidified Peterson’s 67.

“I was pretty lucky to get the morning draw today, so hopefully it’s not too windy tomorrow afternoon. 5-under is hard to beat, but there are a lot of golfers out here, so I’ll just try to do the same thing tomorrow.”

The 31-year-old Irwin also began his round on the back nine, collecting a birdie on the 14th hole followed by a trio across holes 16 to 18. A final push with birdies on Nos. 1 and 8 nudged Irwin into his share of the lead.

Three-time Canadian Men’s Mid-Amateur champion Dave Bunker of Woodbridge, Ont., put himself in good position to defend his 2015 40-and-over Mid-Master title with a 4-under 68. The 51-year-old sits T3 in the overall competition with Vaughan, Ont., native Philip Arci, Brandon Markiw of Edmonton and Calgary’s Dustin Yeager.

The team representing Ontario – consisting of Charles Fitzsimmons (London), Ryan Kings (Kitchener) and Matthew Sim (Oakville) – lead the inter-provincial team competition which takes place concurrently with the first two rounds of stroke-play. The trio combined for a two-stroke lead at 6-under 138 as they look to defend their province’s 2015 title.

In addition to the 2016 Canadian Men’s Mid-Amateur title, the champion will receive an exemption into the 2017 RBC Canadian Open hosted by Glen Abbey Golf Club in Oakville, Ont., from July 24 to 30.