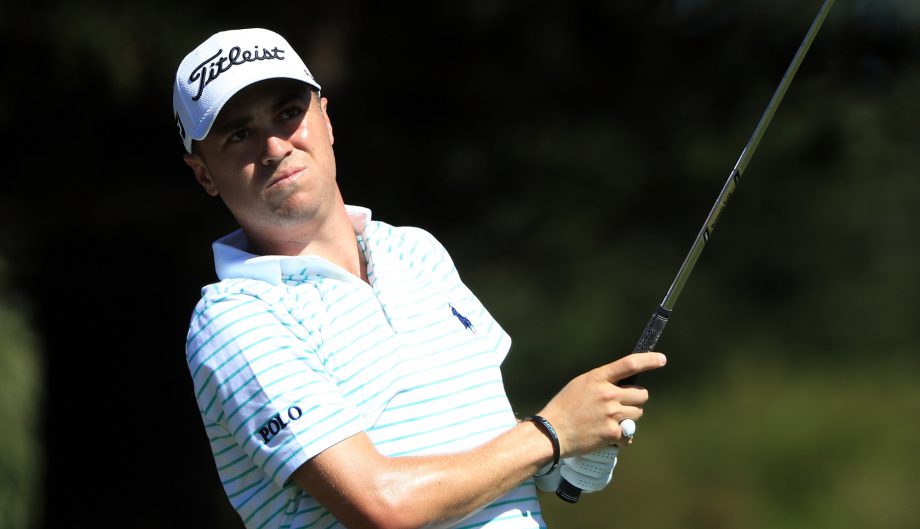 KAPALUA, Hawaii  – Ryan Moore and Justin Thomas finished strong Friday and shared the lead going into the weekend at the SBS Tournament of Championship.

Moore birdied four of his last five holes, including a pair of wedges that he stuffed into tap-in range on the 16th and 18th holes that carried him to a 6-under 67. He played in the same group with Thomas, who birdied his last two holes for a 67.

As many as six players were tied for the lead at one point on another picturesque afternoon along the rugged coast of Maui. One of them was Hideki Matsuyama, going for his fourth straight victory worldwide, until he tried to clear the gorge on the 17th from thick rough and paid for it. He made double bogey, and a birdie on the last hole for a 68 – his 12th straight round in the 60s on the PGA Tour – left him three shots behind.

Reed is still struggling with an illness and learned the limits of what he can do when not playing so well. He hit every green in regulation, missed only one fairway and posted a 65.

Walker, who had a two-shot lead after the opening round, saw too many putts burn the edge of the cup. He finally dropped a shot on the 17th when he choked down to the shaft of a wedge from thick rough and didn’t reach the green. A birdie on the final hole still kept him right in the mix to atone for a playoff loss at Kapalua two years ago.

Jordan Spieth also was in the mix, but only briefly. The defending champion ran off nine birdies, five of them after taking a double bogey on the par-3 eighth hole. But he hooked a tee shot into the hazard on the 17th, hit his next into another hazard and missed a 4-foot putt to take triple bogey. Spieth shot a 69 and was seven shots back.

Jason Day, the world No. 1 who is playing for the first time since September, had a 69 and was five shots behind.

Moore is coming off the best part of his career last season. He won the John Deere Classic, lost in a playoff at the Tour Championship, was the final captain’s pick for his first Ryder Cup and made the putt that clinched the cup for the Americans.

He still feels like the same player, though the narrative has changed. He’s now a Ryder Cup player, and he’d like to pile up more victories.

Moore had a pair of three-putts early in the round, both from long range and one of them on a par 5, but he found his groove with a 25-foot birdie putt on the 12th hole. That carried him to his big finish. The only hole he didn’t birdie was at No. 17, where his 12-footer lipped out.

Thomas, determined to be more accurate off the tee this year, tied for the lead with a tee shot into 3 feet on the par-3 11th, and he appeared to escape trouble on the par-5 15th when he was able to slash his second shot out of the hazard. But he came up short of the elevated green and still left with a bogey, which feels worse as long as he hits it.

But he holed a 15-foot putt on the 17th, and his pitch from short of the 18th green settled 6 feet away for another birdie.

As many as six players were tied for the lead at one point. One of them was Hideki Matsuyama, going for his fourth straight victory, until he took double bogey on the 17th. He settled for a 68 and was three behind.

Canada’s Mackenzie Hughes of Dundas, Ont., carded a 72 (-1) to remain in a tie for 28th. Hughes, the lone Canadian in the field, will tee-it-up Saturday alongside Jordan Spieth at 10:40 am (local time).