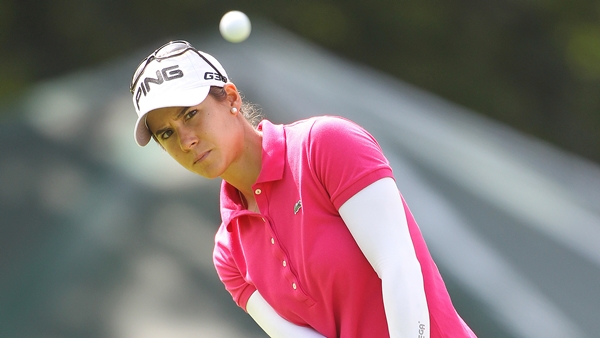 LONDON, Ont. – Azahara Munoz dunked her ball in the water, but it didn’t sink her round.

Instead, Munoz rebounded to fire a 9-under 63 Saturday to shoot up the leaderboard and vault into contention at the US$2.25-million Canadian Pacific Women’s Open. She’s tied with Na Yeon Choi in second place, four strokes behind So Yeon Ryu, who leads at 20-under par going into the final round.

“The key of my round was on (hole No.) 4, I was going for it in two with a 4-iron and I hit in the water,” Munoz said. “But I kept it calm, I knew I could still make up and down for par, so I did, and after that everything just went my way.”

Except, perhaps, for Ryu, who didn’t drift back to the pack by shooting a 67. She’s looking to become the sixth wire-to-wire winner in this tournament’s history and the first since Michelle Wie in 2010.

Munoz had six birdies on the back nine as part of a bogey-free round, tying the course record at London Hunt and Country Club that Ryu set Thursday. The 26-year-old Spainard felt like she was doing “everything” right.

“I was driving the ball really well, and I was hitting really good iron shots into the greens,” Munoz said. “I had so many chances. And then I made lots of putts, too – I made a couple really long ones and quite a few shorter ones.”

As dazzling as Munoz’s round was, she still has some work to do to catch up to Ryu, who has been remarkably consistent through three rounds with 21 birdies and just one bogey.

Ryu is looking for her first victory since 2012.

Ryu is on pace to snap the tournament record of 18 under set by Suzann Petterson in 2009 and is within range of the LPGA Tour record of 27 under, which belongs to the legendary Annika Sorenstam.

“I think my lowest record is 29 under when I was 16 at the Asian Games,” Ryu said. “If I have the chance I want to break my career record, and also if I can I want to break another LPGA record.”

Determined to focus on her own game, the South Korean said she didn’t peek at the leaderboard Saturday. But Ryu already set a goal of sinking seven birdies in the final round.

Ryu, Munoz and Choi, who shot a 6-under 66, tee off as the final group at 11:45 a.m. Sunday. Behind them on the leaderboard are LPGA Championship winner Inbee Park at 14 under, Swede Anna Nordqvist at 13 under and Americans Brittany Lincicome and Danielle Kang at 12 under.

Choi set the tone for the low-scoring weekend with an 8-under 64 Thursday morning. After seeing that, Park wondered if it would take 20 under to win the tournament.

Given the way Ryu has been driving, chipping and putting, that turned out to be a conservative estimate.

“It’s going to be over 20, that’s for sure,” Park said. “I don’t know how So Yeon is going to play tomorrow, but if she goes really low tomorrow, 25-under par’s definitely possible.”

Despite being four strokes back of a player she conceded was even more “on fire” than her, Choi was plenty confident about her chances given the course conditions.

Munoz showed that was possible Saturday, even with more difficult pin placements for the 87 players who made the cut. Her only real glance at the leaderboard was Thursday when she saw Choi’s 64 before she even teed off, but that didn’t make her task feel any more daunting.

“It’s actually good because you have that number in mind, you know it’s possible,” Munoz said. “So at least you go out there thinking you can make lots of birdies.”

Birdies are available all over the course, and players are mindful that each one on the 17th hole means a $5,000 donation from title sponsor Canadian Pacific for the London-based Children’s Health Foundation.

But Ryu hasn’t been saving her best for the second-to-last hole, and Park knows that her friend is so locked in that rivals will have to shoot very low to beat her.

Ryu hasn’t won since the 2012 Jamie Farr Toledo Classic but won two of the three previous times she held the 54-hole lead.

“I definitely think she’s due,” Park said. “I think she was due a long time ago, but she probably threw her opportunities away. If I can’t do it this time, hopefully she does it. I’m really rooting for her.”