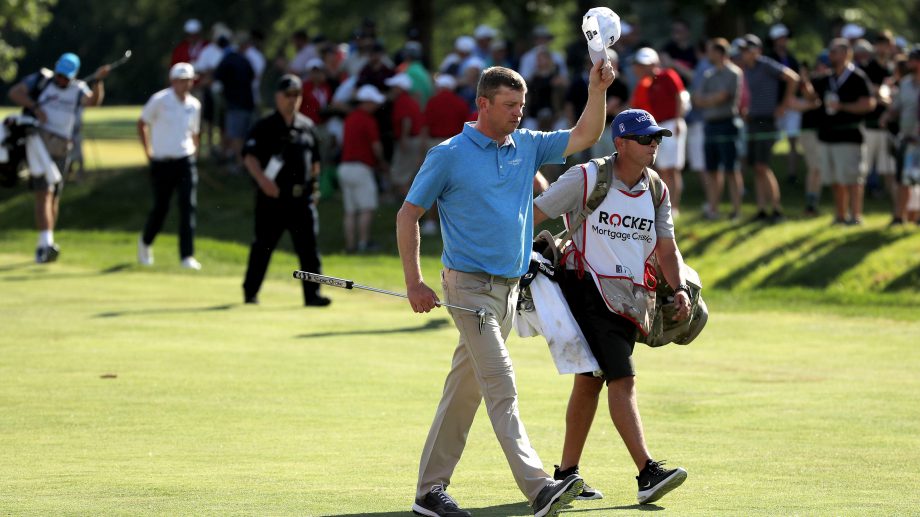 The 36-year-old Lashley’s parents and girlfriend were killed in a plane crash 15 years ago. He dabbled in real estate after graduating from the University of Arizona, quit playing professional golf several years ago and resumed playing in the PGA Tour’s minor leagues.

“Without my parents, I wouldn’t have started playing golf when I was little,” said Lashley, who began playing when he was 8. “They did everything to help me have a career.”

Monday qualifier Doc Redman shot a 67 to finish second. Rory Sabbatini (68) and Wes Roach (68) were another stroke back.

Lashley, the 353rd ranked player in the world, slipped into PGA Tour’s first event in Detroit as an alternate Wednesday.

The Nebraskan took full advantage, shooting a career-low 63 in the first round to take a lead he refused to lose at Detroit Golf Club. Lashley stayed atop the leaderboard with a 67 on Friday and gave himself a cushion with another 9-under 63 Saturday.

On the brink of breaking through during his second PGA Tour season, his sister, girlfriend, buddies and family friends flew to Detroit to join him.

Brooke Lashley, who lives near her brother in Arizona, was in awe of as fans followed and cheered for her little brother as they stood along the ropes from tee to green.

“I’m sure a lot of these people didn’t know him a couple days ago,” she said, standing near the No. 8 green. “He’s doing all he can to focus, but this is so incredible. It’s foreign to him because he’s never had this much attention. He’s never played in front of a gallery like this with TV cameras all over the place.”

In 2014, parents Rod and Char Lashley and girlfriend Leslie Hofmeister, all of Scottsbluff, Nebraska, were missing for three days before their bodies and the wreckage were found near the 13,780-foot Gannett Peak in Wyoming after watching him play in a tournament for the University of Arizona.

“It rocked our community,” recalled Helen Reinhardt, a family friend from Nebraska.

Reinhardt and her husband, Jim, boarded a charter plane in Nebraska that stopped in Minnesota to pick up Lashley’s girlfriend and arrived in the Motor City on Sunday.

“It’s great to be here to watch his dream come true after watching him play in the Dakotas Tour and work his way up to here,” said Jeff Peck, one of about a dozen of Lashley’s friends at Detroit Golf Club.

Lashley made a living as a real estate agent after graduating from Arizona and his playing career started, stopped and resumed again. He won the Waterloo Open, a professional tournament, in Iowa in 2011 and quit competitive golf the next year.

When Lashley was flipping houses, he thought his playing career was over.

Lashley gave the game another shot, playing on the PGA Tour Latinoamerica circuit in 2015 and moved up to what is now called the Korn Ferry Tour two years later.

“The Latin American tour changed his trajectory,” Brooke Lashley said. “It was tough with all the travel to a lot of different countries, but it gave him the chance to get here.”

He made his PGA Tour debut last season in his mid-30s, but he had to end his year after 17 events because of a knee injury. He tied for eighth in February in the Puerto Rico Open – played opposite the World Golf Championships-Mexico Championship – for his only top-10 finish previously on the tour. He started the tournament No. 132 in the FedEx Cup standings.

Lashley played it safe, putting together a conservative round that kept his comfortable lead.

He made a slow-rolling, downhill putt from 15 feet to birdie the first hole. At No. 3, he started confidently walking toward the cup before his 10-foot birdie putt went in to put him at 25 under.

“The birdies on 1 and 3 really calmed me down,” Lashley said.

Lashley had two bogeys on the front nine – one more than he had the previous three rounds – and coasted to victory on the back with two birdies and no bogeys.

Family and friends stood near the edge of the green as he closed out the round.

Lashley’s girlfriend and sister, choking back tears, went onto the green to give him a hug.

“I’m just real emotional,” he said later. “I’m just thankful I got in the tournament.”