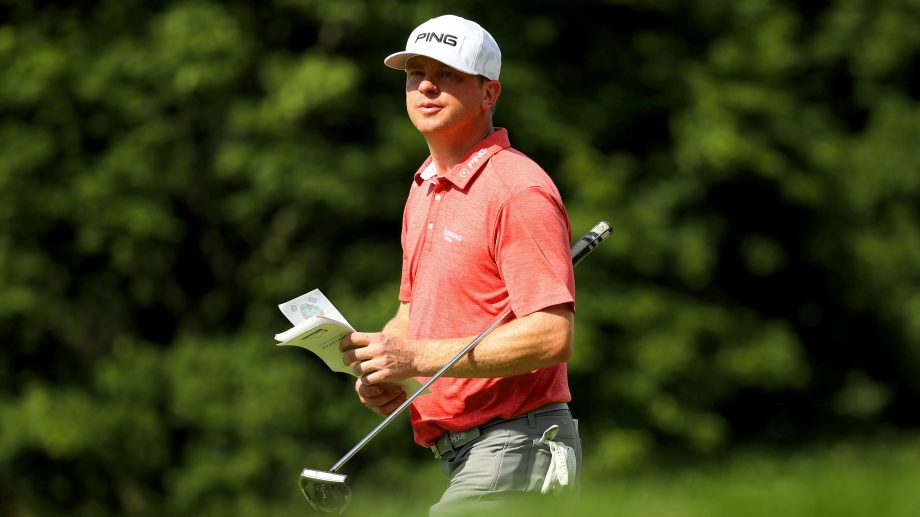 DETROIT – Nate Lashley has been thinking about the deaths of his parents and girlfriend as he tries to close out the Rocket Mortgage Classic for his first PGA Tour title.

“Yeah, it definitely crosses your mind,” Lashley said Saturday after shooting a bogey-free 9-under 63 to open a six-stroke lead at 23 under. “It came through my mind at one point today. At some points it’s not easy, but it goes through your mind and it’s something that’s always going to be there for me.”

The 353rd-ranked player is in his second season on the PGA Tour, reaching the highest level of golf after a long road that included tragedy , selling real estate and playing in the PGA Tour’s minor leagues.

After watching Lashley play in a tournament for the University of Arizona in 2004, his parents and girlfriend died in a plane crash in Wyoming. Rod and Char Lashley and Leslie Hofmeister, all of Scottsbluff, Nebraska, were missing for three days before their bodies and the wreckage were found near the 13,780-foot Gannett Peak.

Lashley meditates, but acknowledges he can’t always control where his thoughts drift even when he’s playing golf.

“You can’t prepare for what your mind’s going to go through on the golf course,” he said.

Lashley made a living as a real estate agent after graduating from college and his playing career started, stopped and resumed again. He won the Waterloo Open, a professional tournament, in Iowa in 2011 and quit competitive golf the next year.

“When I was flipping houses, I thought I was pretty much done with golf,” Lashley recalled. “I always felt like I had the talent and ability to play out here. It was just a matter of getting out here and getting comfortable.”

Lashley gave the game another shot, playing on the PGA Tour Latinoamerica circuit in 2015 and moved up to what is now called the Korn Ferry Tour two years later.

He made his PGA Tour debut last season in his mid-30s, but he had to end his year after 17 events because of a knee injury.

The 36-year-old Lashley slipped into the field at Detroit Golf Club as an alternate. He tied for eighth in February in the Puerto Rico Open – played opposite the World Golf Championships-Mexico Championship – for his only top-10 finish on the tour. He’s 132nd in the FedEx Cup standings.

If he can shoot 63 for a third time, he’ll set the PGA Tour scoring record in relation to par that Ernie Els has held since 2003 at 31 under.

Lashley, the first- and second-round leader, started Saturday with a one-shot lead and pulled away with the low round of the day.

J.T. Poston (66) was second. Cameron Tringale (65) was another stroke back as one of many players taking advantage of scoring opportunities on one of the easiest courses on the tour.

“I think I had dropped 25 places before I even teed off today, so I knew low scores were out there,” Tringale said. “I just had to keep hitting fairways and greens.”

That’s exactly what Lashley has been doing at Detroit Golf Club.

Lashley is not long off the tee, ranking among the middle of the pack. He has been spectacularly accurate on his approach shots into receptive greens, setting him for a lot of relatively short putts that he’s making.

When Lashley did take chances, he was able to make shots.

His drive on the 559-yard, par-5 seventh landed in an adjacent fairway, leaving him with the choice of hitting a shot low below branches or sending the ball over towering trees and toward the green. He chose to go high and cleared the trees, leaving him 120 feet from the pin. Lashley’s approach landed just 4 feet from the cup and he made the putt for birdie.

“I’ve never experienced anything like this,” said Lashley, who shot a 67 in the second round. “You don’t ever expect to shoot 9 under on the PGA Tour, and I’ve done it twice in three days.”