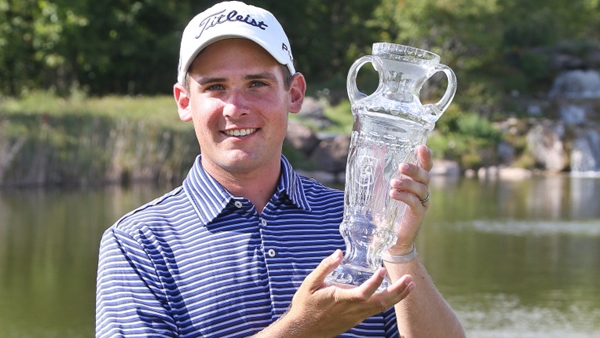 The 24-year old shot a final round 7-under 65 to post 19-under par, then watched as Gligic matched him with a birdie on 18 to tie and force a playoff. The two made a pair of pars on the par-5 18th and then parred the par-4 10th, before returning to the final hole. After Gligic found the deep fescue left of the green and made bogey, McCoy secured the win with a textbook par, securing his first victory as a professional.

“It’s pretty amazing. I don’t know if it’s going to sink in until a little later,” said McCoy, an Iowa State University graduate. “I went into the day thinking if I played well, I could at least content. To walk away with the championship is really kind of surreal.”

The win moves McCoy to No. 8 on the Order of Merit with two events left in the season, $4,776 behind the No. 5 spot as he looks to secure status on the Web.com Tour for next season. McCoy, who began the week 61st on the Order of Merit, said he was looking simply to get inside the top 60 and secure exempt status on PGA Tour Canada for 2015.

“It changes a lot,” McCoy said. “Going in I was just trying to keep my card, now we’ll see how far I can go and maybe try to improve my position. Right now it’s icing on the cake compared to what I was at. To be able to give myself the chance to get some Web.com Tour status if I can finish off well would be nice.”

Starting the day four shots behind 54-hole leader Joe Panzeri, McCoy made three straight birdies on Nos. 9-11 to tie for the lead with Gligic, Bristol, Tennessee’s Jay Vandeventer, Yakima, Washington’s Brock Mackenzie and San Jose, California’s John Ellis, who birdied his first six holes to jump out into a share of the lead and would go on to finish fourth.

With two more birdies coming in, McCoy posted 19-under and watched as Gligic, who carded his second straight 66, matched him.

Vandeventer had a chance to tie with a 4-foot birdie putt on the 18th, but couldn’t find the cup. After McCoy and Gligic parred each of the first three playoff holes, Gligic put himself in trouble with his lay-up, had to pitch short of the green, then couldn’t convert an 8-foot par putt to keep the playoff going for a fifth hole.

“Michael’s a great player. I didn’t want to see him bogey that hole, but he’s a great guy and I really enjoyed playing with him,” said McCoy.

The win comes as the latest success in golf for the McCoy family, after father Mike McCoy’s victory at last year’s USGA Mid-Amateur Championship earned him a spot in The Masters Tournament, where Nate caddied for him.

“It’s nice having a dad that pushes me. I’m not really sure what he’s going to say, but it should be nice,” said McCoy, who also credited his wife Ashley, who caddied for him on PGA Tour Canada for much of the year before returning to work as a teacher in Iowa.

“She’s really been a strong anchor for me this year,” McCoy said. “It was a tough year last year and I had a tough stretch this year, and she was always there saying ‘You can play with these guys, and you put too much pressure on yourself, so just go play.’ She really has helped me a lot, more than she probably knows.”

Panzeri was unable to convert the 54-hole lead into victory for the first time in three attempts on PGA Tour Canada, carding a 74 to finish tied for 12th. One shot behind Ellis in a tie for fifth were Langley, B.C.’s Adam Cornelson, who posted a career-best finish on PGA Tour Canada, and Saint-Georges, Que.’s Max Gilbert, who posted his first top-10 since a win at last year’s TOUR Championship of Canada presented by Freedom 55 Financial.

For the second week in a row, Gligic earned Freedom 55 Financial Canadian Player of the Week honours along with a $1,500 prize. Gligic claimed the award last week as well, finishing solo fourth at The Great Waterway Classic.