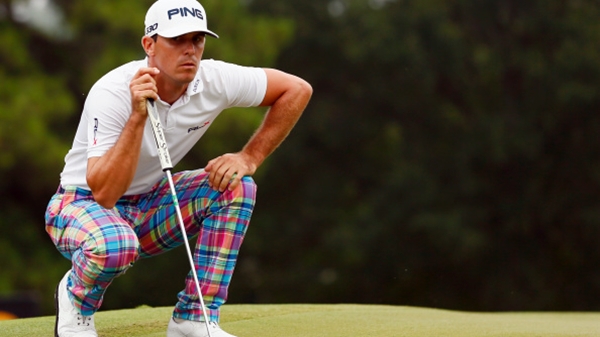 KUALA LUMPUR, Malaysia – Setting out to defend the FedExCup title in Malaysia this week, Billy Horschel is doing so as a changed man.

It’s not the fame, the money or the added pressure that has affected Horschel, but the arrival of his first child, who was born two days after he won the FedEx title.

“Golf isn’t what it used to be,” Horschel said Tuesday as he prepared for the CIMB Classic. “I used to think of golf as life or death. If I played bad, it showed, and I wasn’t a pleasant person to be around.

“With her, she doesn’t care if I play bad or good. She just cares that I’m there for her and I love her.”

The perspective on life may have changed, but one thing that hasn’t is Horschel’s determination to continue his success on the course, and that’s reflected in the tough goal he has set himself for the new season.

Horschel, who missed the cut in his opening event of the season at the Shriners’ Hospitals of Children Open, is part of a strong field at the Kuala Lumpur Golf and Country Club that includes Sergio Garcia, Lee Westwood, Jason Dufner, Charl Schwartzel and defending champion Ryan Moore.

The PGA Tour event’s restricted 78-man field – there is no cut – is precisely half American and half international players, including the top 10 money winners from the Asian Tour.

Hideki Matsuyama, Ryo Ishikawa and Chinese teen prodigy Guan Tianlang are also among those vying for the $7 million in prize money, with the winner also receiving a place in the Masters and PGA Championship.

Dufner, the 2013 PGA Championship winner, is back from a neck injury and played in Australia last week.

“It was nice to get out and compete again, play some golf, see where I stand health-wise,” Dufner said. “Had some rust probably on my game and made quite a number of bogeys that I normally don’t make. But pretty good week for the most part, made a lot of birdies, and I did a lot of good things, so I’m encouraged going forward.”

While the new PGA Tour season is in its infancy, the Asian Tour is building toward its climax, with David Lipsky chasing a strong result in Malaysia as he seeks to hang on to his Order of Merit lead.

Nearest rival Anirban Lahiri of India won the prior event in Macau.