A new season, and higher goals for Jimmy Walker 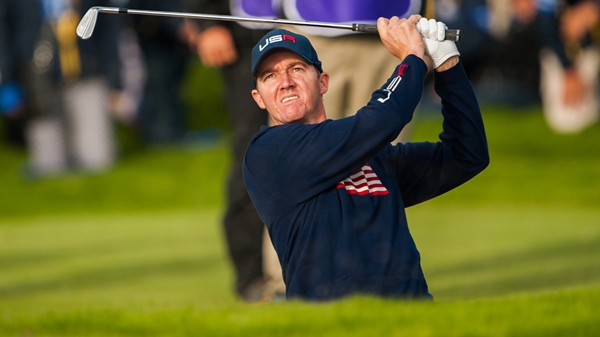 NAPA, Calif. – Jimmy Walker ended his remarkable season with a high standard of golf that probably didn’t get the attention it deserved.

That’s not much different from how it started.

Walker captured his first PGA Tour title a year ago at the Frys.com Open, and then added two more wins before the tour reached the Florida swing. That was easy to overlook by the end of the year when Rory McIlroy came on strong with a pair of majors and a World Golf Championship.

It’s not that Walker tapered off – he had three top 10s in the majors. It’s just that winning is hard, and he happened to make it look easy. It got him into the Masters for the first time. He led the FedEx Cup almost the entire year until McIlroy overtook him in August. And he made his first Ryder Cup team.

He finished strong, minus a reason to celebrate.

Europe already had clinched the Ryder Cup when Walker capped off the strongest performance by any American on the final day at Gleneagles. Playing in the penultimate match, he made eight birdies in 16 holes and needed them all to beat Lee Westwood, who made six birdies.

“I’ve played with Jimmy and knew he was a very good player,” Westwood said. “Whenever he’s played with me, unfortunately, he’s played well. You’re more upset when you lose a game if you’ve not played well, but I don’t really mind the fact that I lost a game to somebody that shot 8 under through 16 holes on Sunday of a Ryder Cup. That’s pretty impressive stuff.”

The question for Walker is what he does for an encore.

A new PGA Tour season begins Thursday with the Frys.com Open, the first chance for Walker to defend a title. He’ll have to do it on a different golf course, with the tournament moving from CordeValle to Silverado, the resort amid the vineyards and foothills of Napa Valley.

The final hour of last year’s tournament was a blur. Walker closed with a 66 and rallied past Brooks Koepka. It was his first victory in eight years on tour, and Walker never imagined what would follow. He won a shootout at Waialae in the Sony Open, and then held on to win the AT&T Pebble Beach National Pro-Am.

“Three wins in eight starts doesn’t happen a lot,” Walker said Wednesday. “I feel like the rest of the year was good. You win, and the question is when are you going to win again? And then to win so fast, and then a third time, it’s like I jumped that whole `get the second win and the monkey off your back’ and then was an established play. And then you have to play well in the majors.

“There is always the next step.”

The next step is to develop some consistency, although Walker certainly wasn’t lacking. He had top 10s at Augusta National (his Masters debut), Pinehurst No. 2 and made a late bid at Valhalla to get into the mix before he tied for seventh. He also tied for sixth at The Players Championship.

And yet he heard too often that he didn’t win again after Pebble in February, and that his three wins came before the international stars began showing up in America. Walker knows how hard he worked with Butch Harmon to ignore any criticism, or the lack of attention.

If the trophies or the growing bank account were not enough, it was the reaction from the people who matter – the other players.

“Just the way they look at you, the way they nod at you,” he said. “I think I’ve got respect from my peers, and that’s what matters to me.”

He will play the opening two rounds at Silverado with Ryder Cup teammates Matt Kuchar and Hunter Mahan. Walker could have used an extra week off after a grueling four-week stretch of the FedEx Cup playoffs and his first Ryder Cup, where every shot felt like the back nine at a major.

He will get his break after this week, and then try to build on his season. His bucket list of what he wants to achieve in golf is a lot smaller.

“I ticked off quite a few,” he said. “You set those big goals and then you realize you had to do a lot of things really well along the way. The year before last, my first year working with Butch, he said, `You know you had your best year, but you didn’t win. It’s about winning. You need to go win.’ I tried to take that to heart.”

Winning a major is the obvious next step. Walker also is looking two years down the road at Rio. He would love nothing more than to play in the Olympics.

“For me to do that, I’ve got to keep doing what I’m doing, and doing it right,” he said.