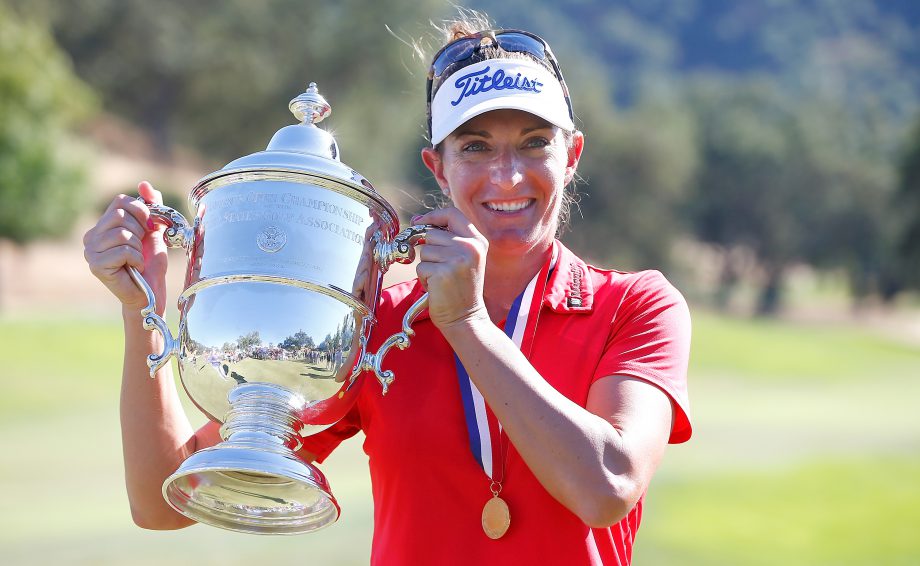 SAN MARTIN, Calif. – Eleven years after finishing as runner-up as an amateur in her first U.S. Women’s Open, Brittany Lang won her first major title – with help from a playoff penalty on Anna Nordqvist.

Lang made par on all three holes of the aggregate playoff and Nordqvist was given a two-stroke penalty for touching the sand with her club in a fairway bunker on the second playoff hole Sunday, helping deliver Lang the title.

The players were not told of the penalty until they were in the middle of playing the final hole after officials reviewed replays in the latest controversy at a USGA event.

Lang then sealed the win with a short par putt on the final playoff hole, while Nordqvist made bogey to lose by three shots.

At last month’s men’s U.S. Open, eventual winner Dustin Johnson played much of the final round not knowing if he would be penalized one stroke because his ball moved as he addressed it on the fifth green. The penalty ended up proving moot as Johnson won by three shots.

Lang shot a 1-under 71 to finish with a 6-under 282 for the tournament at CordeValle for her second win in 287 tournaments on the LPGA Tour. She survived a bogey on the 17th hole that led to the playoff before recovering in the playoff for a breakthrough win at age 30.

Both players made pars on the first hole of the playoff, which was played on the final three holes of the course. Then things got interesting on the next hole after Nordqvist hit her tee shot into a fairway bunker.

While preparing to hit the shot, Nordqvist’s club barely touched the sand. She did not realize it and both players made par on the hole, heading to the final playoff hole seemingly tied.

But television replays showed the infraction and USGA officials studied the video before determining if the two-stroke penalty was necessary. An official told Nordqvist about the penalty after she hit her third shot on the 18th hole but before Lang did, giving her a possible advantage.

Lang hit her shot onto the green and the two-putted for the win, getting hearty congratulations from many of her fellow Americans on tour after she joined Michelle Wie (2014) as the only U.S. golfers to win the Open in the past six years.

Lang capitalized on a surprising final-round collapse by world No. 1 and 54-hole leader Lydia Ko, who made a double-bogey 7 on the ninth hole and shot 3-over 75 on the day, finishing two shots off the lead in a four-way tie for third with Amy Yang, Sung Hyun Park and 2009 winner Eun Hee Ji.

Lang took sole possession of the lead when she perfectly read a putt from more than 20 feet that broke slightly right before going in the hole to move her to 7-under, with Nordqvist in the clubhouse at 6-under after making an eagle on the par-5 15th.

But Lang followed that up with her first three-putt of the week when she just missed a par from about 5 feet, leading to groans from the crowd. She followed with a two-putt for birdie on the par-5 18th, setting the stage for the playoff.

Lang came on the scene as an amateur back in 2005 when she finished tied for second at the U.S. Women’s Open at Cherry Hills. But in more than a decade as a pro, Lang has won just one tournament, the 2012 Manulife Financial LPGA.

After shooting a 75 in the second round to drop seven shots behind leader Park, this tournament didn’t appear to be the one where she would have her breakthrough.

But she staged one of the best U.S. comebacks in years, with her 36-hole deficit the biggest for any winner at the tournament since Betsy King came from nine shots back after two rounds to win in 1990.

Ko had a two-shot lead heading to the eighth hole and seemed on her way to becoming the youngest man or woman to win three majors. But then she bogeyed the eighth hole before her collapse on nine.

Ko’s tee shot went left into the rough. Instead of just chipping out, Ko decided to try to clear the hazard and get back into position to make a possible birdie.

But her shot from the rough landed in the hazard and Ko could not find it and took a penalty. Then her wedge shot went over the green into the rough before Ko managed to get up and down from there for a double bogey that dropped her out of the lead for good.

“I should have judged the lie a little better and maybe played a little smarter and laid up short of the hazard,” she said. “Then just lay up again and try and make up-and-down for par.”