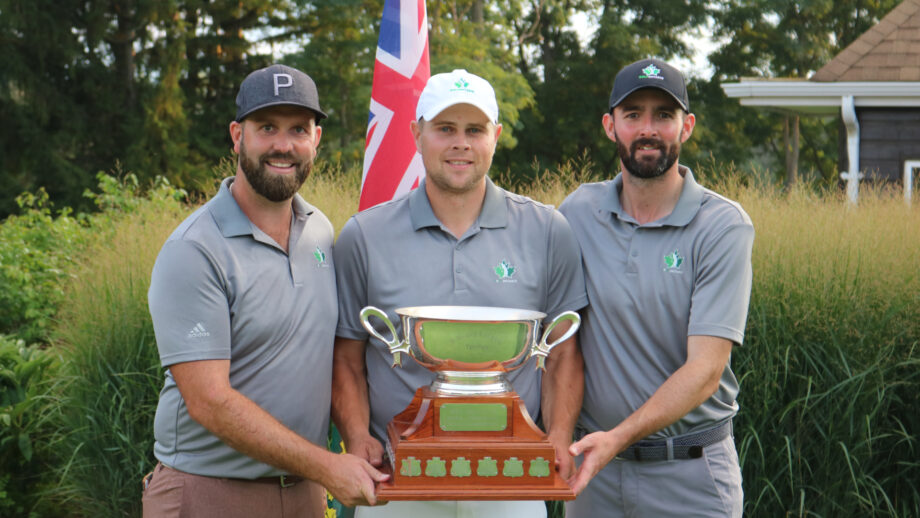 The trio of Cam Burke, David Lang and Brett Nymeyer combined for a total score of 3-over-par to edge Alberta by a single stroke on Wednesday at The Thornhill Club in Thornhill. Ont. It is the fifth time since the beginning of the event in 1992 that the province has won the trophy on home soil.

Charles Fitzsimmons continued to pace the field in round two as he seeks to defend his national title. For the second consecutive day, the 35-year-old handled his own through difficult conditions and challenging pins at The Thornhill Club, firing a 3-under-par 67 to extend his lead to four at the midway mark of the championship.

A pair of birdies on the front nine kickstarted Fitzsimmons’ round and an encore was delivered on No. 15 by way of an eagle to get the hometown favourite to 3-under on the day.

Curtis Markusson, Ryan Tsang and Warren Sellors made the biggest splashes on Wednesday, each carding rounds of 4-under par 66 to jet up the leaderboard and back into contention. Markusson and Tsang are T2 at 1-under par on the tournament, while Sellors creeped 37 spots up the standings into a tie for fifth.

A bogey to start the day set Markusson back to 4-over-par on the tournament, but that was as far back as the Gimli, Man., native would fall. The 40-year-old converted on seven birdie putts thereafter – including six in an 11-hole stretch – to reposition himself in the thick of the action.

“Just keep going, and kind of forget about the good things as soon as they happen and just think you’re still grinding to try to make the cut,” said Markusson about his hot stretch. “You know, there’s a lot of good players out here and you never know what can happen; a couple of bad swings or a couple of good swings, either way, so you just stayed focused, one shot at a time. You versus you is the mentality basically to play well.”

Markusson, who has relocated to Winnipeg, Man. where he plays at St. Charles Country Club, says lots of green and lots of fairways were the key to his low round today. Monday’s cancelled practice round was taxing for most of the players in the field, but Markusson saw it as a glass half full.

“If you see too much sometimes you get too in your head and you don’t see enough it’s sometimes a good fresh run,” he said. “You visualize it a bit more and you come out the next day and you’re visually set which is nice.”

Markusson’s 66 also gives him the lead in the Mid-Master division – a subdivision for players 40 and over.

Tsang, a native of Thornhill, Ont., capped off a 4-under-par stretch between holes 3-8 with an eagle on the par-5 8th. Bogeys on Nos. 12 and 14 put a halt on his round, but a pair of birdies down the stretch vaulted him back into a tie for second.

Sellors, out of Hudson, Que., was bogey-free in round two. The runner-up in Quebec’s Men’s Mid-Amateur Championship birdied holes 1, 6 and 8, before dropping a final birdie putt on No. 17 to settle into the top-5 heading into the final two rounds of the championship.

After Wednesday’s second round, the field was cut to the low 70 players and ties, including the low 15 players in the Mid-Master division. Round three is scheduled to tee off at 8:00 a.m. on Thursday.