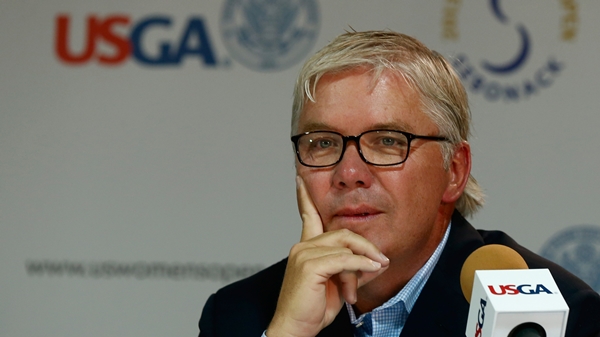 FAR HILLS, N.J. – The United States Golf Association has announced the nomination of Thomas J. O’Toole Jr., of St. Louis, Mo., to serve a second one-year term as the 63rd president of the USGA. The election of officers and the 15-member USGA Executive Committee will take place Feb. 7, 2015, at the USGA’s Annual Meeting in New York.

As president, O’Toole leads the USGA’s professional staff of more than 300 and nearly 1,200 volunteers who serve on more than 30 committees.

“It is a great honor to be nominated to continue my service to the game for a second term,” said O’Toole. “The USGA remains steadfast in its commitment to advance the long-term viability of golf, to continue to deliver exemplary championships, to increase accessibility, and to ensure that the game remains challenging and enjoyable for those who play.”

O’Toole is in his seventh year as a member of the USGA Executive Committee, a term that includes three years as vice president and one year as secretary.

In 1992, O’Toole helped to found the Metropolitan Amateur Golf Association, which serves eastern Missouri and central Illinois. He continues to serve on its executive board.

O’Toole, a partner in the law firm of Mickes Goldman O’Toole, LLC, chairs its Business and Corporate Group, while his practice focuses on real estate, specializing in zoning/land use, condemnation and real estate transactions. He earned both his undergraduate degree (1979) and law degree (1985) from St. Louis University.

Four other current members of the Executive Committee have also been nominated to serve as officers: Diana M. Murphy, of St. Simons Island, Ga., and William W. Gist IV, of Omaha, Neb., as vice presidents; Sheila C. Johnson, of Middleburg, Va., as secretary; and Mark E. Newell, of McLean, Va., as treasurer.

In addition, Ernest J. Getto, of Santa Barbara, Calif., has been nominated to serve a third term as general counsel for the USGA.

There are four newly nominated candidates for the Executive Committee for 2015: J. Stuart Francis, of Hillsborough, Calif.; Robert D. Kain, of Gates Mills, Ohio; Martha J. Lang, of Birmingham, Ala.; and Gregory B. Morrison, of Duluth, Ga.

J. Stuart Francis is a senior managing director for Evercore, where he leads the firm’s Silicon Valley technology practice. He most recently served as vice chairman of investment banking and chairman of the global technology group for Barclays. Previous roles include vice chairman of Lehman Brothers, the last of many positions he held with the organization since 1991. He has been an advisor to many of the most visible Silicon Valley companies, including Amgen, Cisco Systems, Facebook, Google, NetApp, Netsuite and Workday. Francis is an accomplished amateur golfer, having played in three U.S. Amateur Championships and two NCAA Championships. Francis earned a B.A. from Princeton University, where he was co-captain of the varsity golf team, and an M.B.A. from Stanford University’s Graduate School of Business.

Robert D. Kain retired as co-CEO of IMG in 2006 after a 40-year career at the global sports management company. He began his career in tennis management, representing elite players and each of the Grand Slam events. He was the chairman of IMG’s Academy business, and also created and built IMG’s figure skating business, as well as IMG Fashion. In 2007 Kain was vice chairman of the Cleveland Browns, and helped Randy Lerner buy and reorganize Aston Villa Football Club. He also served on the board of trustees of The Cleveland Clinic Foundation. An accomplished amateur golfer, Kain played in the 2005, 2009 and 2011 U.S. Senior Amateur Championships and the 2006 and 2007 British Seniors Open Amateur Championships. Kain is a graduate of the University of Virginia.

Martha J. Lang was chairman of the USGA Women’s Committee from 2011-2012, after serving on various USGA committees for more than 20 years. She served on the Illinois Women’s Golf Association board from 1988-1991, and joined the USGA Regional Affairs Committee in 1989. Today, Lang serves on the Shoal Creek board of governors and golf committee, as well as the Women’s Southern Golf Association board of directors. She has competed in more than 60 USGA championships, and won the 1988 U.S. Women’s Mid-Amateur Championship. She played on the 1992 USA Curtis Cup Team, and captained the 1996 Curtis Cup Team as well as the USA Team in the 2014 USA Women’s World Amateur Team Championship. From 1975-1991, Lang held various accounting positions, including a six-year stint at Shell Oil. She is a graduate of the University of Alabama.

Gregory B. Morrison is the senior vice president and chief information officer for Cox Enterprises, Inc. He previously served as vice president of information systems at Prudential Financial, Inc., where he worked in various roles over two tenures. Morrison also served as the chief operating officer at realestate.com in 2000-2001. Prior to that, he served as a commissioned officer in the United States Army Signal Corps for eight years. Morrison serves on the board of directors of Piedmont Healthcare System, and the boards of trustees for Clark Atlanta University and Gwinnett Technical College. He also serves on the board of visitors of Emory University. He holds a B.S. in math and physics from South Carolina State University and a masters of industrial engineering from Northwestern University.