Palmer opens with a 63 to lead in Boston 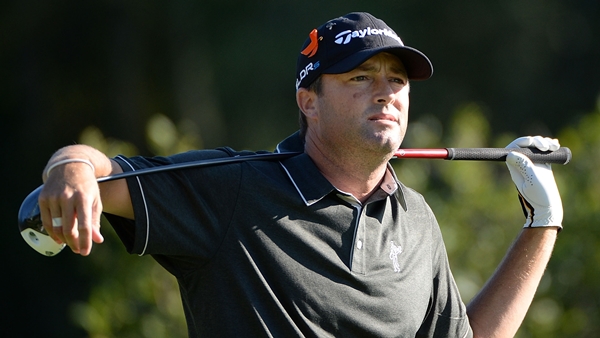 NORTON, Mass. – Ryan Palmer has felt all year that something special was going to happen. For now, he’ll take his lowest round of the season.

Palmer took only 21 putts and made birdie on half of his holes Friday on the TPC Boston, giving him an 8-under 63 and a two-shot lead over Keegan Bradley after the opening round of the Deutsche Bank Championship.

“It was one of my best ones of the year, for sure,” Palmer said.

He didn’t miss a putt inside 15 feet and closed out his round with a pitching wedge to 18 feet, making the downhill putt for his ninth birdie.

Bradley matched his low round of the season, though what meant more was the timing. This is the final week before U.S. captain Tom Watson decides which three players he will pick to fill out his Ryder Cup team. Bradley always seemed like a logical choice, though he wants to leave nothing to chance.

He played bogey-free in a gentle breeze, and it was just the start he needed.

“I’m not going to sit up here and say any cliches that I’m not thinking about the Ryder Cup or any of that,” Bradley said. “I am very aware every second of the day that I’m being watched by the captain. And I’m just trying to embrace that be aware of it and enjoy it if I can.”

Webb Simpson, who also needs a pick to return to the Ryder Cup, and Jason Day of Australia were among those at 66.

Jordan Spieth recovered from a double bogey to start his round and, with his entire family in tow, turned it around with four birdies and an eagle for a 67. Also at 67 was Ian Poulter, who seems certain to be a Ryder Cup pick for Europe on Tuesday considering how much damage he’s done to the Americans in the competition. Poulter was thinking only about his golf, which hasn’t been very good this year.

“I just want to play golf,” Poulter said. “It’s been a (bad) year, and I want to turn it around right now.”

Rory McIlroy was brilliant at times and sloppy at other times in his round of 70.

Brantford, Ont.’s David Hearn opened with a 1-under 70 and is tied for 26th, while Weyburn, Sask.’s Graham DeLaet is tied for 29th after an even-par 71 Friday.

Phil Mickelson had a 74. He wasn’t sure what to expect and even Lefty had to be surprised by his card that featured six pars, six birdies, four bogeys, a double bogey and a triple bogey.

“I said it would be feast or famine,” Mickelson said. “I was hoping it would be Stableford. If it was Stableford, I’d be right in it.”

Instead, he needs a good round Saturday to make sure he stays in the top 70 in the FedEx Cup to advance next week to the third playoff event in Denver.

For two weeks – especially this one – the FedEx Cup shares the stage for that other cup. So many players are thinking less about the chase for a $10 million bonus, and more about a chance to play a tournament where they don’t get paid at all.

Watson and European captain Paul McGinley announce their three picks Tuesday. This is the final qualifying week for Europe, though only the players competing in Italy this week can affect the standings.

Palmer finished No. 18 in the Ryder Cup standings. His name hasn’t been mentioned as prominently as others bidding for captain’s pick. But he looked plenty good Friday.

“I keep telling myself something is going to happen. I don’t know where or when,” Palmer said. “My game has been in good shape. It was a matter of getting it all together.”

His regular caddie, James Edmondson, didn’t make the trip. Edmondson is close friends with Lance Bennett, who works for Matt Kuchar. Bennett’s wife died of a seizure Tuesday in Dallas, and caddies and some players wore a black hat with an orange ribbon as a tribute to Angela Bennett. The couple has a 4-year-old daughter.

Bradley won all three of his matches with Mickelson in the last Ryder Cup at Medinah and is desperate to be on the American team that will try to win the cup back on Sept. 26-28 at Gleneagles in Scotland. And he’s not shy about saying so.

Bradley was never in big trouble. He drove it long and straight, and that goes a long way on the TPC Boston. Bradley played with Mickelson in three matches at Medinah in the last Ryder Cup, and they never lost. Bradley also played a practice round at Gleneagles with Watson before the British Open.

“I think if I go out and shoot good scores, yeah, I think I’m in good shape,” Bradley said. “But there’s so many great players that aren’t on this team. I don’t take anything for granted. I don’t think I’m a lock by any means.”