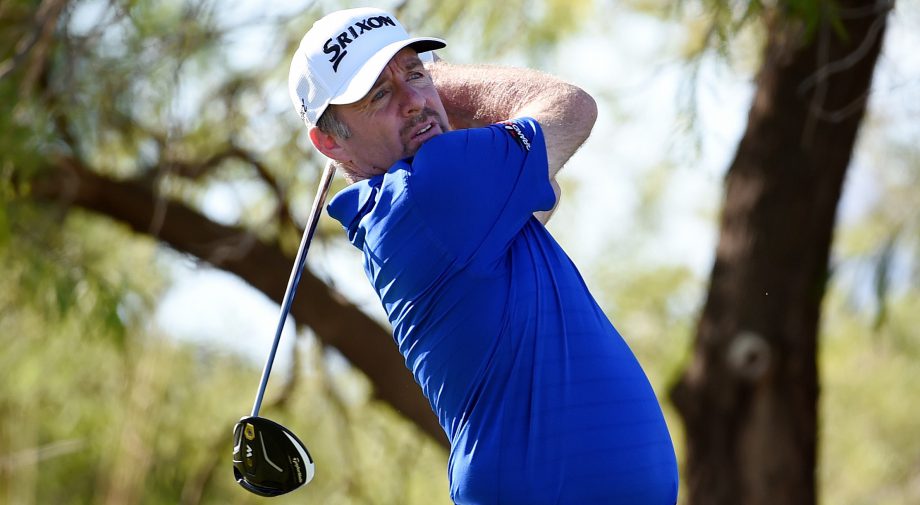 LAS VEGAS – Rod Pampling followed an opening 11-under 60 with a 68 on Friday to keep the lead in the Shriners Hospitals for Children Open.

The 47-year-old Australian rebounded from two early bogeys to get to 14-under 128 at TPC Summerlin. He won the last of his two PGA Tour titles in 2006 at Bay Hill.

“The hole looked really big yesterday,” Pampling said. “I started out today and I didn’t think they’d cut them (the greens) early on. I changed ball markers, and I knew I was playing good, so I just kind of threw out a new vibe, and it started to work. I knew it wasn’t bad, it’s just like it happened, so just let it go. Corrected myself and played nice after that.

Brooks Koepka had two eagles in a 67 to pull within a stroke. He won the Phoenix Open last year for his first tour title and was 3-1 in the United States’ Ryder Cup victory over Europe.

Aaron Wise, the NCAA champion last season for Oregon, was two shot back at 12 under with four holes left when play was suspended because of darkness. He eagled the par-5 13th and 16th on his front nine.

Adam Hadwin of Abbotsford, B.C., was six back after shooting a 64. Nick Taylor, also of Abbotsford, was tied for 26th place while Mackenzie Hughes of Dundas, Ont., and Graham DeLaet of Weyburn, Sask., tied for 66th.

Pampling bogeyed two of his first five holes, failing to get up-and-down from a greenside bunker on the par-4 11th and from the rough over the green on the par-3 14th. He rebounded with birdies on four of the next seven holes, birdied the par-4 seventh, three-putted the par-3 eighth for bogey and two-putted for a closing birdie on the par-5 ninth.

“You’ve just got to trust yourself that you’re playing well,” Pampling said. “I knew I had been, not just yesterday, the form had been good before that. I was confident in myself. I didn’t panic. You can easily panic out there, and you shoot 2, 3 over, and at the end of the day you’re just scratching your head. I just relaxed. I knew it was good, so I let it come to me, and it thankfully did.”

Koepka eagled the par-5 ninth and 16th, and had five birdies and five bogeys – the last a three-putt from the fringe on the par-4 18th to drop out of the lead.

“It was kind of sloppy at points, but I felt like I played pretty well,” Koepka said. “The putter was hot, but just got to clean a few things up.”

Chez Reavie had the round of the day to make the cut, shooting a 61 after opening with a 76. He had six birdies in a seven-hole stretch that ended on the par-4 10th, added birdies on 13 and 15 and chipped in from 60 feet for eagle on 16.

“The biggest challenge for me was just to mentally be in a position to even have a chance of playing well today,” Reavie said. “Fortunately, I was. I was positive and just said I was going to go try and shoot as low as I can and see what happens.”

“Kind of felt better and better as the day went on and was able to roll a few in there on the back nine,” Kirk said.

“My game feels really good,” Bradley said. “I’ve been playing good for a while now. It’s nice to see some results.”