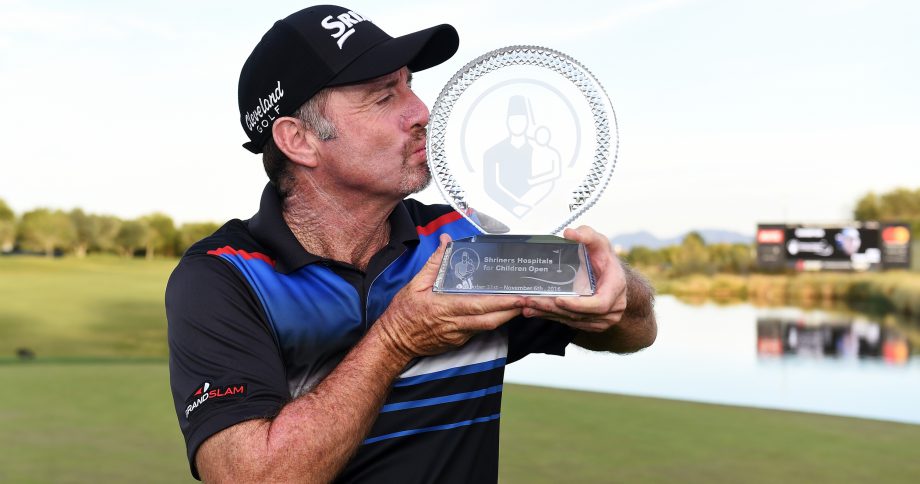 LAS VEGAS – The birdie putt was still a foot away from the hole when Rod Pampling raised his right arm and thrust it in the air as the ball tumbled into the cup.

His victory Sunday in Las Vegas was a long time coming.

Pampling left nothing to chance by holing a 30-foot putt on the final hole at the TPC Summerlin to close with a 6-under 65 for a two-shot victory in the Shriners Hospitals for Children Open, his first PGA Tour title in 10 years.

“Sometimes you amaze yourself at what you can do under the gun, which hadn’t been for a long time,” Pampling said. “And it was great.”

The 47-year-old Australian last won on the PGA Tour at Bay Hill in 2006. He lost his card and spent two full seasons on the Web.com Tour, and then had to return to the Web.com Tour Finals at the end of last season just to get his card back.

And now Pampling is headed to Kapalua for the Tournament of Champions in January, and he’ll be returning to the Masters for the first time in 10 years.

“It’s extremely rewarding,” Pampling said. “Winning Arnold Palmer’s event is still on top. But coming back from what we’ve had the last few years, to get a win under the belt, it’s phenomenal. Amazing.”

Brooks Koepka closed with a 67 to finish second.

Adam Hadwin of Abbotsford, B.C., was the top Canadian. He shot a 1-over 72 in the final round to place 27th at 11 under. Graham DeLaet of Weyburn, Sask., and Abbotsford’s Nick Taylor both finished 6 under while Hamilton’s Mackenzie Hughes came in at 2 under.

Lucas Glover, going for his first victory in five years, was tied with Pampling with two holes to play until he made a bogey from the bunker on the par-3 17th, and he closed with another bogey when winning was out of reach. He shot a 69 to finish third.

Francesco Molinari of Italy had a career-best 61 and tied for fourth with Geoff Ogilvy (68) and Harris English (67).

For someone who had gone so long since he last won, Pampling kept his poise even when it looked as though the final round was getting away from him. He began the back nine with two bogeys in three holes – a three-putt on No. 10, missing the green with a pitching wedge on No. 12 – and fell one shot behind Glover.

Tied for the lead on the par-5 16th, he pushed his drive well right into rough so deep that Pampling asked to identify his ball, and it was a good thing – it wasn’t his ball. His ball was a foot to the right, buried so badly that he could only muscle it some 30 yards behind another tree, and he had to lay up short of the water. From 121 yards, Pampling hit wedge into 6 feet and saved par to stay tied.

“That was the turning point for Rod, and that was awesome,” Glover said. “He played great.”

Glover’s tee shot on the 17th was about a foot away from being good, but it caught the lip of the bunker and left a difficult shot with the green sloping away from him. He missed a 12-foot par putt and never caught up.

Pampling finished at 20-under 264 and will be exempt up until his 50th birthday when he is eligible for the PGA Tour Champions.

“After this week I still think I have a couple of more wins, so I’m looking forward to the next few years and just see what we can do.” Pampling said.

He became the fifth Australian to win on the PGA Tour this year, joining Jason Day, Adam Scott, Greg Chalmers and Aaron Baddeley.

Ogilvy had his best finish since he tied for second in the Deutsche Bank Championship two years ago. Keegan Bradley closed with a 66 and tied for seventh. Bradley tied for sixth two weeks ago in Malaysia, giving him consecutive top 10s for the first time since March 2013.

Aaron Wise, the NCAA champion from Oregon, tied for 10th and earned a spot in the field next week in Mexico.