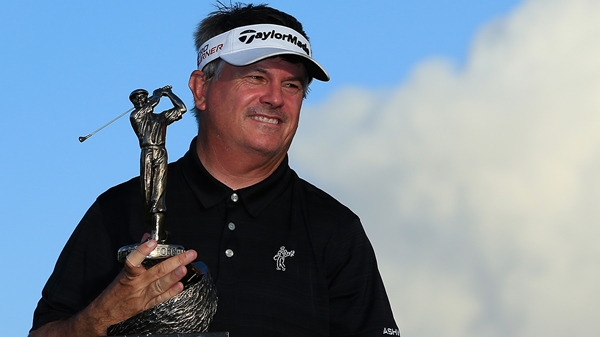 BOCA RATON, Fla. – Paul Goydos closed with a birdie for a 3-under 69 and a one-stroke victory over Gene Sauers on Sunday in the Champions Tour’s Allianz Championship.

Goydos chipped to a foot from behind the par-5 18th green and tapped in for his second victory in 12 career starts of the 50-and-over tour. He won twice in 507 starts on the PGA Tour.

“Statistics are a wonderful predictor of the past,” Goydos said. “Part of it is experience and maturity. If I played like I did today 10 years ago, I don’t think there’s any way I would have won this tournament. I didn’t have my best game, but I got it around.”

On a wild day at Broken Sound where nine players had a share of the lead at some point, Goydos finished at 12-under 204 to claim the $255,000 first prize. He chipped in for an unlikely birdie at the difficult ninth and stayed atop the leaderboard the rest of the day.

“It was a shootout without great scores,” Goydos said. “The course played tough today.”

Sauers birdied his final two holes for a 67. It was his fourth runner-up finish on the Champions Tour, including a playoff loss to Colin Montgomerie last year in the U.S Senior Open.

“I’ve lost the last five playoffs I’ve played in. I was hoping to break that streak,” Sauers said. “But I’m ecstatic with the way I played.”

Fred Funk chipped in for eagle on the final hole to tie for third at 10 under with John Huston, playing for the first time in 18 months because of a neck injury, and 2014 winner Michael Allen. Funk and Huston shot 66, and Allen had a 67.

Jose Coceres, who started the day nine shots back in 45th place, played his first 16 holes in 10 under to tie Goydos for the lead. But Coceres bogeyed his 17th hole and finished sixth after a 63. The biggest comeback in Champions Tour history was when Jay Sigel rallied from 10 back to win the 1994 GTE West Classic.

Canada’s Rod Spittle led by two shots at 11 under until he made a 10 on the par-5 sixth.