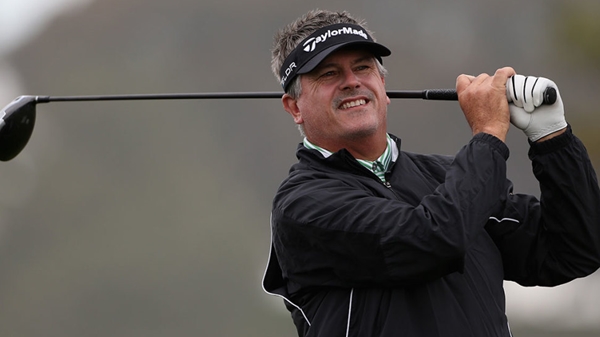 KAPOLEI, Hawaii -Paul Goydos won the Hawaii Championship on Sunday for his first Champions Tour title, breaking out of a tight pack with four straight birdies.

Making his fifth start of the 50-and-over tour since turning 50 in June, Goydos closed with a 4-under 68 at Kapolei Golf Club for a tournament-record 19-under 197 total. He opened with rounds of 66 and 63 for a share of the second-round lead with Fred Funk.

“I think I used what I’ve learned today,” Goydos said. “I’m making progress, which I’m pleased with. I didn’t play well on the PGA Tour this year. Happy held it together. Handled adversity well.”

“It was good and bad,” Funk said. “Disappointing. Had a lot of chances. … I’m doing everything I can to stay competitive.”

After birdieing Nos. 14-17 to take a two-stroke lead, Goydos scrambled for bogey on the par-4 18th after flying his approach well above the green and through trees to the left of the grandstand.

“You’re a little nervy up there,” Goydos said.

The putt on 16 gave broke a tie with Funk and Dunlap.

The birdie putt on 17 gave him the cushion he ended up needing on 18.

“That was massive,” Goydos said.

Goydos won twice on the PGA Tour, the last in the 2007 Sony Open in Hawaii.

He broke the tournament record of 14-under 202 set by Willie Wood in 2012 in the inaugural event.

Davis Love III struggled in his Champions Tour debut, closing with a 72 to tie for 64th in the 81-man field at 3 under. The 20-time PGA Tour winner turned 50 in April.

Davis Love III – a 20-time PGA Tour winner who turned 50 in April – struggled in his Champions Tour debut, closing with a 72 to tie for 64th in the 81-man field at 3 under with Canada’s Jim Rutledge.