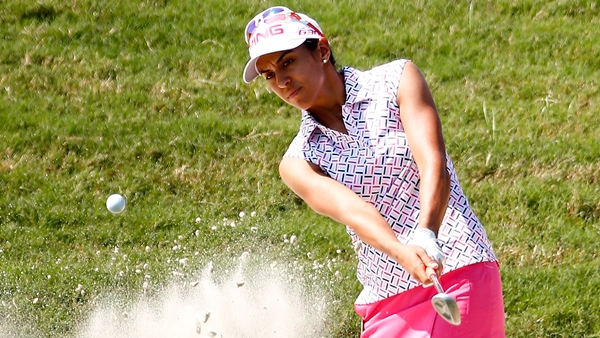 PRATTVILLE, Ala. – South Africa’s Paula Reto birdied her final hole Friday for a 6-under 66 and a three-stroke lead in the Yokohama Tire LPGA Classic.

Reto had five birdies in a six-hole stretch on her opening nine – the back nine on Capitol Hill’s Senator layout. The 24-year-old former Purdue player finished with eight birdies and two bogeys to reach 13-under 131.

“I was just really patient with myself,” said Reto, playing her first season on the LPGA Tour after a year on the Symetra Tour. “I hit a couple good irons, especially early in the round. I hit a couple close, 5 feet, so that was nice, got the momentum going pretty early. It was nice to birdie the last hole yesterday as well as today, that was really nice. Just trying to stay patient and not think too much, just simple things.”

She started playing golf when she was 16.

“I moved from South Africa with my family in `05,” Reto said. “We moved to Florida and I used to play field hockey and ran track. So I tried to start a team over here in Florida and the track and the field hockey wasn’t as good, so my dad used to play golf and he said, `So, why don’t you just try golf.’

“So got in my freshman year of high school and tried golf. I loved it and ended up just dropping track and field hockey and just kept playing and loved the game.”

South Korea’s Mi Jung Hur, tied for the first-round lead with top-ranked Stacy Lewis at 64, was second after a 70. Hur had four birdies and two bogeys.

“I had a cold last night, so it was really hard to focus today,” Hur said. “I finally wake up on the back nine and had a good nine holes.”

Lewis, the 2012 winner in the event that was dropped from the schedule last year after losing its title sponsor, was third at 9 under after a 71. She had five birdies and four bogeys.

“Just got in trouble a couple times off the tee and made some bogeys that I shouldn’t have,” Lewis said. “Really just got in some bad places where I couldn’t make par.

“The hole locations are a lot tougher today. Especially, you look at yesterday, some holes we had front pins and today they’re back pins. That’s an extra 30 yards on these greens.”

Former University of Alabama star Stephanie Meadow was 2 under after a 74.

Sue Kim is the top Canadian after two rounds. The Langley, B.C. native is tied for 45th at at 1-under 143. The only other Canuck to advance to weekend play was Hamilton, Ont.’s Alena Sharp, who is 2 over and tied for 70th.