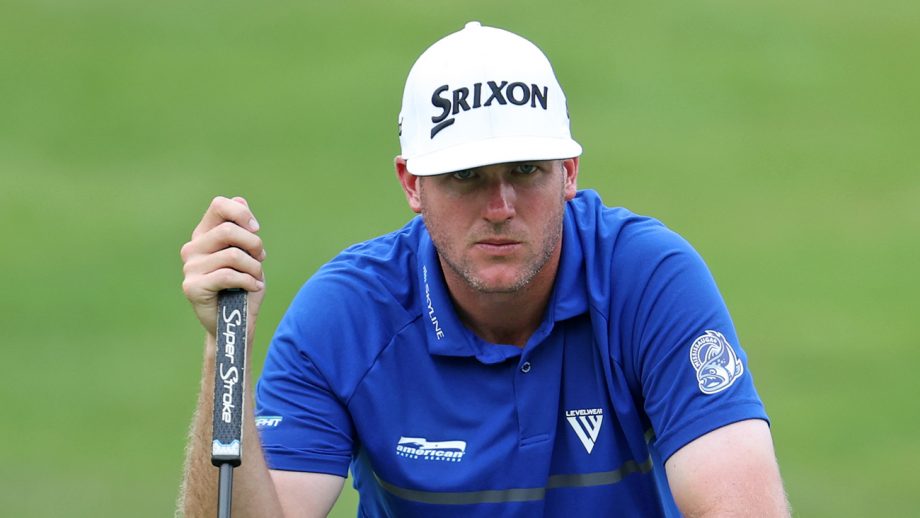 NICHOLASVILLE, KENTUCKY - JULY 15: Taylor Pendrith of Canada lines up a putt on the 16th green during the first round of the Barbasol Championship at Keene Trace Golf Club on July 15, 2021 in Nicholasville, Kentucky. (Photo by Andy Lyons/Getty Images)
Canadian Press

NICHOLASVILLE, Ky. (AP) – Brian Stuard shot an 8-under 64 on Thursday to take a one-stroke lead in the suspended first round of the PGA Tour’s Barbasol Championship.

Play was suspended twice in the afternoon because of rain and lightning, with 30 players unable to finish before dark.

After dropping a stroke on the par-4 18th to finish his opening nine, Stuard birdied five of the next six holes in the morning round at Keene Trace.

“I felt like my iron play was nice today,” Stuard said. “I didn’t think I drove it well, but there’s not a lot of rough so you can kind of attack from anywhere, so that’s what I was able to do.”

Patrick Rodgers, Stephen Stallings Jr. and Will Grimmer also were 7 under when darkness stopped play. Rodgers and Stallings had two holes left, and Grimmer three. Play was delayed for a total of 2 hours, 35 minutes in the afternoon.

Stuard won the rain-shortened Zurich Classic of New Orleans in 2016 for his lone PGA Tour title. The 38-year-old Michigan player tied for eighth last week in Illinois in the John Deere Classic.

“It was a good start, but in all honesty, it doesn’t really mean much,” Stuard said. “I need three more good rounds to put myself in contention, I guess. It’s nice to start off well. I need three more, so just got to keep going.”

List birdied the par-4 17th after the second rain delay to join Stuard at 8 under, then drove into the right-side water on the par-4 18th and closed with a bogey.

“Long day,” List said. “There’s birdies to be made on this golf course, so I kind of knew that I had to be aggressive out there and I was fortunate to be able to make some birdies and one eagle. Had a few bogeys, but overall I played well.”

Bramlett eagled the par-5 fifth and eighth holes and also had a double bogey.

Defending champion Jim Herman opened with a 67. He won in 2019, and the event was canceled last year.

Wilco Nienaber, the big-hitting South African who received a foreign exemption to play, was 3 under with three holes left.

Canadians Roger Sloan and Michael Gligic were both 3 under when play was suspended, while Nick Taylor fired a 1-under 71.

John Daly had two double bogeys in a 76.