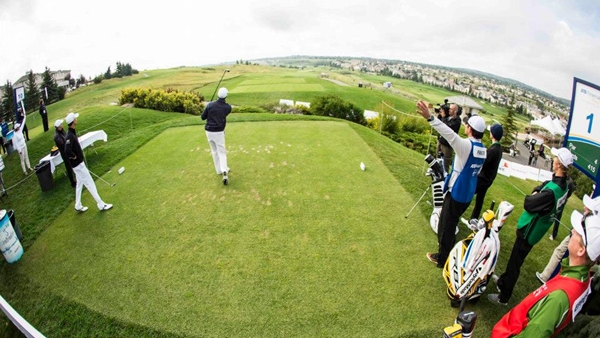 (Oakville, Ont. and Ponte Vedra Beach, FL) – PGA TOUR Canada’s second season will include 12 $150,000 events in 2014, with the race for Web.com Tour status for The Five going coast-to-coast from May to September.

The season will begin with the PC Financial Open, a new event May 26th to June 1st at Point Grey Golf and Country Club in Vancouver and conclude at the TOUR Championship of Canada presented by Freedom 55 Financial September 8th to 15th at Sunningdale Golf & Country Club in London, Ont.

“Thanks to the tremendous support of our sponsors and the great work of our host organizations, we’ve been able to grow our schedule and develop an exciting presence of strong, established events and exciting new tournaments from coast-to-coast,” said PGA TOUR Canada President Jeff Monday. “We look forward to building upon our successful first season in 2013 and making the 2014 season even bigger and better.”

After kicking off the season with PGA TOUR Canada’s first event in Vancouver, the Tour will head to Victoria, B.C. for the 32nd playing of the Bayview Place Island Savings Open presented by Times Colonist, June 2nd to 8th at Uplands Golf Club. Following an off week, the Tour will resume at the Syncrude Boreal Open presented by AECON, June 16th through 22nd at Fort McMurray Golf Club in Fort McMurray, Alta.

The SIGA Dakota Dunes Open presented by SaskTel will mark the first of three events in as many weeks, returning to Dakota Dunes Golf Links outside Saskatoon, June 30th to July 6th, followed by The Players Cup, July 7th through 13th at Pine Ridge Golf Club in Winnipeg, and the inaugural Thunder Bay Golf Classic July 14th to 20th at Whitewater Golf Club in Thunder Bay, Ont., after which the top three players on the PGA TOUR Canada Order of Merit will earn exemptions into the RBC Canadian Open on the PGA TOUR.

The season will resume when the ATB Financial Classic moves to a new date, taking place July 28th through August 3rd at Sirocco Golf Club in Calgary. Players will then compete at the inaugural Forces and Families Open, a new event supporting the men and women of the Canadian Armed Forces and their families, August 4th through 10th at Hylands Golf Club in Ottawa.

The 2014 season will make an exciting run to the finish with four events in four weeks, starting with The Great Waterway Classic at Loyalist Golf and Country Club just outside of Kingston, Ont. August 18th through 24th, followed by The Wildfire Invitational presented by PC Financial August 25th to 31st outside Peterborough, Ont., where the top 128 players on the Order of Merit will compete in a unique pro-am format. The Tour will then head east for the Cape Breton Celtic Classic presented by PC Financial September 1st through 7th at The Lakes Golf Club outside Sydney, N.S.

The 2014 season will conclude by returning to Sunningdale Golf and Country Club in London, Ont. for the TOUR Championship of Canada presented by Freedom 55 Financial, taking place September 8th through 14th and concluding the race for The Five.