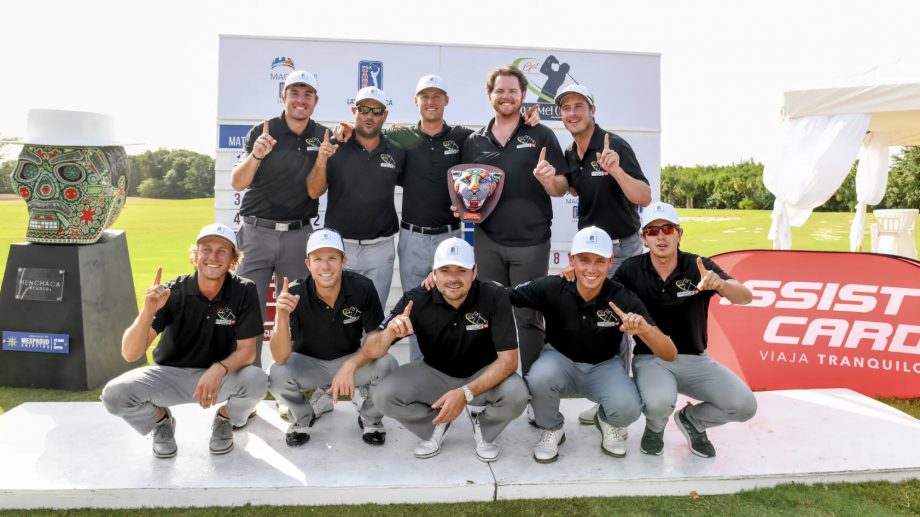 Cozumel, Mexico – Despite a valiant Mackenzie Tour – PGATOUR Canada charge, the PGATOUR Latinoamerica held onto their lead and won the Go Vacaciones Cozumel Cup presented by Assist Card by a mark of 11.5-8.5 on Saturday at Cozumel Country Club.

With the Mackenzie Tour picked up points in the first four matches of the day thanks to the efforts of Michael Gellerman, Sam Fidone, Mark Anguiano and Zach Wright, the next five points on the leaderboard went to the blue team, with Tyson Alexander’s victory on the 18th green securing the 10th point, and with Ian Holt already dormie, secured the Cup.

“We played good golf, nobody got more than one or two up and we were making birdies and pars, it was fun,” said Alexander, who made a five-foot par putt to win the match on the closing hole. “My (teammates) came out at the end to watch, and it happened to go my way.”

Not a single player on the Latinoamerica team lost all three of their matches, and the team effort turned out to be essential in winning the cup back after the Mackenzie Tour took it from them in 2016.

Meanwhile, on the Mackenzie Tour side of things, Playing Captain Sam Fidone was happy with how hard everybody played on the final day.

“Nobody ever likes losing,” said Fidone. “But those 10 guys over there played awesome all week, and I’m proud of our guys too for putting up a huge fight today and this whole week.”

Fidone was one of the strongest players on the Mackenzie Tour side, like Alexander, winning all three of his matches.

“Just having the opportunity to play in this event was a huge honour,” added Fidone, the 6thranked player on the Mackenzie Tour this season. “Cozumel is beautiful, and I don’t think you’ll see any of us pouting about this when we get back to Secrets.”

“They’re brothers of mine,” said Higgs. “We’ve been together and been on the same flights and see each other at the golf courses sun up to sun down all year, so it means a lot to win a team competition after the years we all have had.

“I will never forget this week with these nine knuckleheads.”