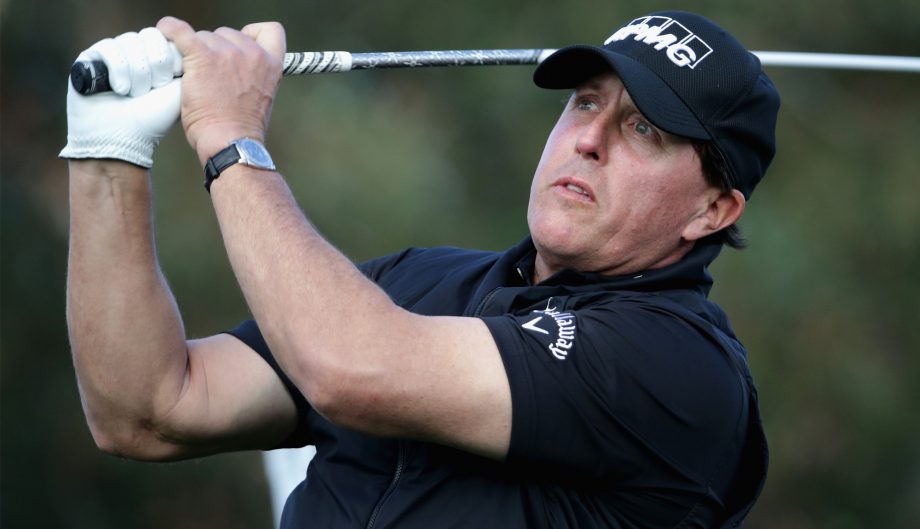 LA QUINTA, Calif. – Phil Mickelson hit his opening tee shot so poorly in morning rain and cold that he hit a provisional ball just to get in another swing.

He scrambled to par the hole and went on to shoot a 4-under 68 on Thursday in the CareerBuilder Challenge, leaving him four strokes back in his return from two sports hernia surgeries.

“I struck it horrible, but I scored out of my mind,” Mickelson said. “So, I’m very happy with it. My first round of golf was Saturday and I’ve been able to work out just the last two weeks.”

Lefty hooked his first tee shot into the trees at La Quinta Country Club, then reloaded and hit the provisional into the fairway.

“That next hole, the second hole’s an extremely difficult drive and I wanted to just get another swing,” Mickelson said.

He found the first ball and hammered a shot under the trees to just off the front of the green.

Tour rookie Dominic Bozzelli shot a 64 on the Stadium Course at PGA West – the most difficult of the three courses – to top the leaderboard. He holed out from 115 yards for eagle on the par-4 14th.

“Been working hard back home, doing all right things on and off the course, and it’s nice to come out and have that hard work pay off,” Bozzelli said.

Jhonattan Vegas, the 2011 champion, was a stroke back at 65 along with Harold Varner III, Hudson Swafford and Patton Kizzire. Vegas and Kizzire played PGA West’s Jack Nicklaus Tournament Course, and Varner and Swafford opened at La Quinta.

Rain fell off and on in the morning and more was expected Friday, with the PGA Tour moving the tee times up an hour.

“Ain’t nobody never comfortable when you’re having to play golf when it’s raining and a little cool like it was,” Boo Weekley said after a 66 on the Stadium Course.

Play started with the temperature in lows 50s and it barely climbed into the 60s in the afternoon. The forecast high Friday was 61.

“The ball didn’t go as far, but you don’t have to hit it that far out here,” Varner said.

The 46-year-old Mickelson had surgery Oct. 19 – three days after tying for eighth in the season-opening Safeway Open – and again Dec. 12.

“I feel fine,” Mickelson said. “I’ve been able to work out the last two weeks. And again, you start out real slow, but you get back to it, you get it back pretty quick.”

His caddie, Jim “Bones” Mackay also made a comeback after having both knees replaced.

Mickelson won the 2002 and 2004 events and tied for third last year. The first-year tournament ambassador won the last of his 42 PGA Tour titles in the 2013 British Open.

“There’s no better place to learn and to get better than to come out here on these great golf courses and put it to the test,” Mickelson said. “You can get away with some mistakes, and I was able to salvage a few pars with up-and-downs, so it doesn’t beat you up too bad. It’s a perfect place to start the year.”

Wearing a jacket with a logo of his leaping celebration in the 2004 Masters, Lefty hit a wedge to 2 feet for birdie on the par-4 fourth and also birdied the par-5 sixth and par-4 eighth. On the par-4 ninth, he made a 45-foot birdie putt after driving left onto the adjacent first hole.