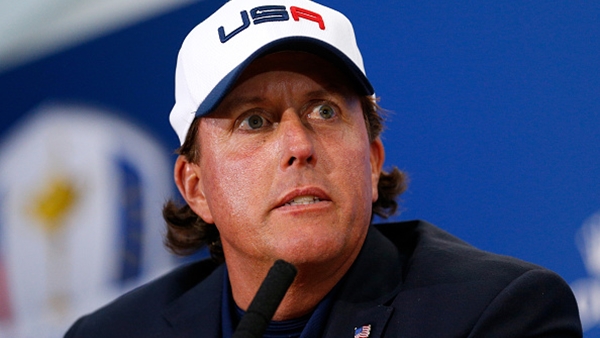 GLENEAGLES, Scotland – Phil Mickelson delivered his most memorable shot after the Ryder Cup was over.

Not with a club, but with his words.

Mickelson knew this Ryder Cup was a lost cause before it was over. Even though he won his singles match over Stephen Gallacher, another European victory looked imminent. That’s what led Mickelson to say in a television interview, “We had a great formula in `08 and I don’t know why we strayed from it. I don’t know why we don’t ever try going back to it.”

He was talking about the only Ryder Cup the Americans have won in the last 15 years.

And he was just getting warmed up.

It’s rare to hear even a remote reference to criticism from a player at Ryder Cup. Mickelson took it to an unprecedented level when he delivered his message in the closing news conference, sitting alongside his 11 teammates with captain Tom Watson right in the middle.

Mickelson blistered one captain by praising another.

He spoke in detail about Paul Azinger’s pod system – three groups of qualifiers that filled out their pod by telling Azinger whom they wanted as a captain’s pick. They ate together. They practiced together. They never played with anyone outside their pod, and they were next to each other in every lineup. And then he raved about how Azinger had a game plan for every occasion, which suggested that Watson did not.

Watson never looked at Mickelson as he spoke. When asked to reply, the 65-year-old captain said he had a different philosophy and sneered at the notion of a pod.

This might have been the most intense match of the week.

Even when the Europeans lost at Valhalla under Nick Faldo, they closed ranks in the news conference. Lee Westwood and Sergio Garcia both were benched for the first time in their careers. They are not fans of Faldo. And yet they took the blame that day by saying they should have played better.

It needed to be said.

And as bad as it made Watson look – and Mickelson, for that matter – it was the right time and the right place. The message was directed more at the PGA of America, which selected Watson without player input, than it was at the captain. Given the stage, his comments will not be forgotten.

Watson wanted to be captain again, even though it had been 21 years since he was captain, or even attended a Ryder Cup. After watching the meltdown at Medinah, he was tired of the Americans losing. Watson saw a team with a silver spoon that was in dire need of an iron fist.

Azinger’s all-inclusive style was key in winning the Ryder Cup. Davis Love III had a similar style at Medinah, and the Americans built a 10-6 lead going into the final day. If not for Justin Rose making a 45-foot putt, and Ian Poulter making just about everything, the Americans would have won that cup, too.

Watson talked about keeping it simple. He saw his main roles as the captain’s picks and the pairings, and neither merited a passing grade.

It wasn’t all on Watson, who didn’t hit a single shot. And it’s not a complete failure by the Americans. Europe always has a great team, and now it has great players. Winning the Ryder Cup was never going to be easy.

Watson returns to Scotland next year at St. Andrews for his final appearance in the British Open, which he has won five times. He is revered in Scotland, and a bad week at Gleneagles is not going to change that. This Ryder Cup loss will be forgotten. It’s not like the Americans losing is an anomaly.

He came across as disingenuous and disrespectful for going public with what could have been handled in private.

It was a big risk for Mickelson, who is wildly popular with fans but can be as polarizing as Tiger Woods. Mickelson opened himself up to massive criticism for calling out Watson on such a big stage. And it’s not as if Mickelson can lean on a great Ryder Cup record. A five-time major champion, he has been on eight losing teams.

Mickelson doesn’t speak from the hip. This was calculated. He knew the risk.

Go back to start of the week, when Mickelson poked fun at Rory McIlroy’s lawsuit against his management company that now involves Graeme McDowell. Mickelson said the best part of American unity is that “we don’t litigate against each other.”

He has been coming over to Britain for 20 years. He knew what kind of headlines one comment was going to generate. And he didn’t care.

“I might get roasted,” he told Golf Digest. “I can handle it.”