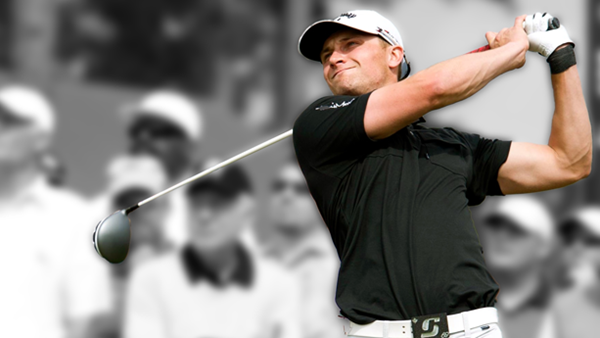 LAS VEGAS – Connor Powers has a bit of Happy Gilmore in him as he winds up to attack a golf ball with his driver, though he doesn’t shoot the kind of low scores Adam Sandler’s character did in the movie.

Kind of hard to make a lot of birdies when half the time you have no idea where the ball is going.

“I lose a bunch of balls off the tee,” Powers said. “Accuracy is not the main goal for me when I pick up a club.”

What is the goal for the former minor league baseball player is hitting the ball a long way, a very long way. He can pound it over 400 yards, and sometimes the balls even stay in the fairway by the time they’re done rolling.

On Tuesday, he could earn a cool $250,000 if he can be the biggest of the big hitters in the winner-take-all RE/MAX World Long Drive Championship.

“It’s pretty sweet that there’s an opportunity to make money doing this,” said Powers, a former Mississippi State first baseman who washed out in the minors after hitting 20 homers in three seasons in the San Diego Padres’ system. “But if it was just 500 bucks I’d still be doing it. It’s just so much fun to be out there and compete, especially after ending my baseball career. That’s really what it is about for me.”

Powers and seven others who qualified last month in Mesquite, Nevada, will go head-to-head in the championship final at the Las Vegas Paiute Golf Resort. Six balls each, with the winners advancing to the next round until only one long driver is still standing.

The 26-year-old Powers qualified for the finals by hitting a drive 402 yards, though that wasn’t enough to make him the favorite among the eight players left. That would probably be Joe Miller, the 2010 world champion and 2013 runner-up from London who competes on the Long Drivers European Tour and has a streak of 13 straight wins.

Or it could be Jamie Sadlowski, the 2008 and 2009 world champion from Canada who weighs just 165 pounds but had the longest qualifying drive of 409 yards in Mesquite.

“They are all different sizes and ages and have different backgrounds,” said Art Sellinger, the former two-time world champion who runs Long Drivers of America. “The one thing they do have in common is they’re focused on how fast they can swing a golf club and how square they can get at impact.”

Sadlowski, for one, uses his exceptional flexibility while hinging his shoulders and wrists to unload an incredible amount of force into the golf ball at contact.  It has been suggested that the key to the Alberta native’s hinge-system likely stems from years of playing hockey left-handed while swinging the golf club from the right side.

Powers barely played golf at all before stumbling onto the long driving scene, though several of the finalists are scratch handicap players or better. Powers took up long driving at the urging of former Mississippi State teammate Jeff Flagg, who is also in the finals.

Powers plays more now and is a 15-handicap, no better than most weekend golfers. But his ball striking skills – at least with the driver – are world class.

“I still think you have to be a legitimate striker of the ball,” said Sellinger, a pioneer of the long driving ranks. “Whenever I’m trying to educate amateurs I tell them they’re ball strikers. I didn’t say they know how to shoot 65 for a living.”

For Powers, it’s a lot like stepping up to the plate in baseball, complete with Golf Channel televising it live.