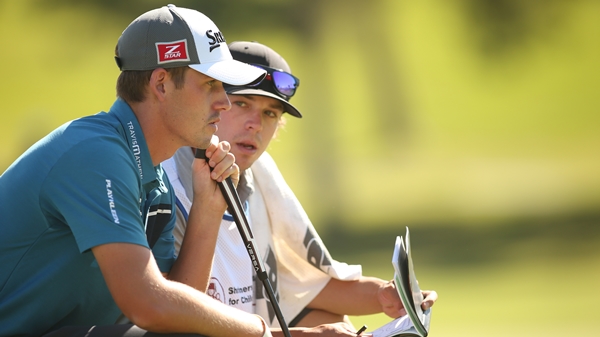 LAS VEGAS – Andrew Putnam birdied two of the last three holes Friday for a 6-under 65 and a share of the second-round lead with Russell Knox in the Shriners Hospitals for Children Open.

Putnam is played his fourth PGA Tour event. He earned his tour card this year through the Web.com Tour.

“It was a good round,” said Putnam, who birdied all three par 5s. “I started off slow, one bogey, but played good out there. I played the par 5s well today, was able to take advantage of those.”

“I got a bit worried, though, because I was all over the map,” Knox said. “I didn’t feel real good with my swing, and I knew if I just made some pars, eventually something would click. And I made a couple putts, which really settled me down.”

Andrew Svoboda and Tony Finau were a stroke back. Finau shot 65, and Svoboda had a 67.

“I putted really well today,” Svoboda said. “I made some long putts.”

Defending champion Webb Simpson topped the group at 8 under after a 65.

“I just kept it right in front of me,” Simpson said after his bogey-free round. “That’s what I did last year on this golf course. If you keep hitting the fairways, you’re going to have opportunities to make birdie. I made some putts today. Didn’t make many yesterday. All around, just a good, solid day.”

Martin Laird, the 2009 winner who was tied with Stewart Cink for the first-round lead, was in the group at 8 under after a 70. He had a double bogey on the par-4 seventh – his 16th hole of the day.

“I was 1 over through three, so to shoot 8 under is pretty cool,” Levin said. “I made a couple nice putts on my 17th and 18th holes, which kind of makes you feel a little better. I really didn’t play that bad, I just didn’t putt well yesterday. I probably played a little better today tee to green, but not much. It’s just the putts went in today.”

“Obviously, I knew what I had to do,” McNeill said. “I wasn’t trying to really force anything, but fortunately got off to a decent start, and again in the middle of the round kept it going, and then a nice finish birdieing 18.”

Stuart Appleby went the other direction, rebounding from a 74 with a 64 to move into a tie for 30th at 4 under.

Canada’s Nick Taylor had a bogey-free 65 Friday, which included a pair of birdies and back-to-back eagles. The PGA Tour rookie is tied for 16th at 6-under.

A fellow Canadian, David Hearn, is also tied for 16th with Taylor. Hearn shot a 66 Friday.

Adam Hadwin followed up his opening-round with a 1-over 72 to fall into a tie for 45th at 3-under par.

Jarrod Lyle had a 71 to fall into a tie for 22nd at 5 under. The Australian is making his second PGA Tour start since a recurrence of leukemia some 18 months ago.

FedEx Cup winner Billy Horschel missed the cut with rounds of 71 and 72. At No. 13, he was the top-ranked player in the field.

Bae Sang-moon, the Frys.com Open winner Sunday in the season opener in Napa, California, also shot 71-72 to miss the cut.