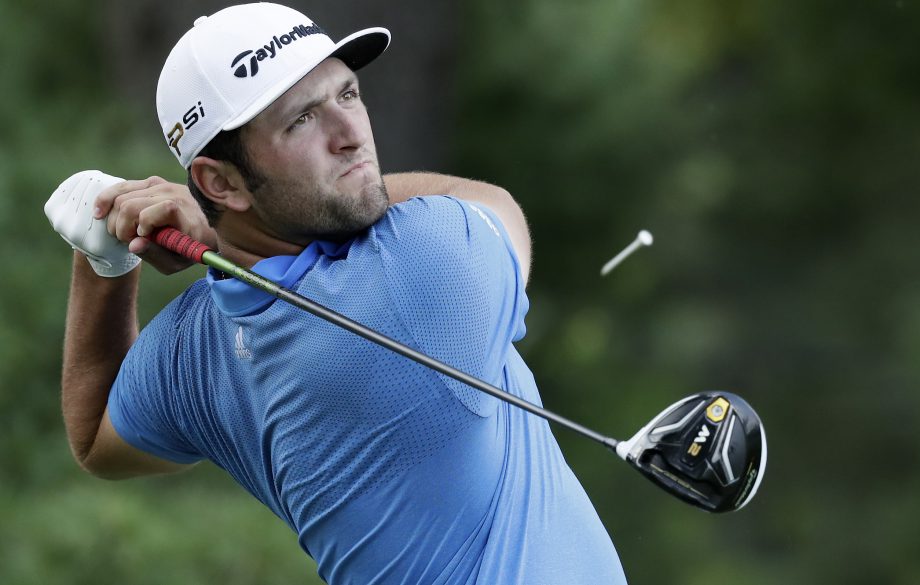 BETHESDA, Md. – Jon Rahm was surprised about the level of fan support he has received at the Quicken Loans National, far away from his native Spain and where he went to school at Arizona State.

It helped that Rahm was playing with local guy Bobby Hurley III and helped even more that the two players went shot-for-shot Friday to share the lead. Rahm and Hurley were tied at 11 under, three strokes ahead of Vijay Singh going into the weekend at Congressional.

Rahm, who’s playing his first event as a professional, said he couldn’t be happier by following a great first round with a second-round 67.

Rahm would’ve had sole possession of the lead had he not missed a 10-foot par putt on the 18th hole. As a result, he was tied with Hurley, a Naval Academy graduate who lives in nearby Annapolis and grew up in Leesburg, Virginia.

Hearing chants of the Annapolis zip code and more from the galleries, Hurley shot a 6-under 65.

“I just hit a lot of good shots,” Hurley said. “I was just able to keep the pedal down and continue to attack the golf course, which is not something you usually do around Congressional. But being soft I was able to take advantage of the conditions and get the ball a little closer to the hole than you’re used to.”

Before Rahm and Hurley even got onto the Blue Course on Friday, Singh put on a show to rival what Ernie Els did Thursday. Singh turned in a 66 that was most memorable for his shot from the edge of the water on No. 18.

The 53-year-old Singh hasn’t won on the PGA Tour since 2008. He would be the oldest PGA Tour winner if he captures the Quicken Loans National, but said he wasn’t thinking about making that kind of history.

“It would be good to win,” the three-time major champion said. “But it’s only halfway, so I’ll be focused on my game tomorrow and see what happens.”

Singh looked to be in trouble on the 18th when he hit into the rough under a tree and then landed his approach shot just inches from the water. He rolled up his pants and waded in to hit the shot that dropped him to 8 under at Tiger Woods’ annual tournament.

“I was unfortunate that it went that far in and fortunate that it stayed out,” Singh said. “I kept sinking when I got in the water. I started out with just my foot in the water and then it started getting up to my ankles. The more I moved the deeper I went, so I kind of had to play a very safe shot. I got away with a bogey.”

Els bogeyed holes Nos. 1 and 18 but played well enough in between to finish with a 69 to get to 7 under along with Webb Simpson (68), Bill Haas (69) and Harold Varner III (69). The 46-year-old Els said he has to be happy with where he’s at and hopes he and Singh can play well Saturday to set up a vintage showdown.

“I’m not quite as old as Vijay, but I’m getting there,” Els said. “He’s obviously a legend of the game and done so much for the Tour and a great champion. I know he’s been working hard on his game and he’s been quietly optimistic. Same with me. I’d love to maybe see if we can really go low tomorrow and see him on tomorrow.”

Sixth-ranked Rickie Fowler had just one bogey in his second round, shooting 68 to get to 6 under. Fowler ended his streak of missed cuts at three.

“I was able to just kind of stay patient and give myself a lot of looks at birdie, which is always good,” Fowler said. “Nice to have a tee time on the weekend.”