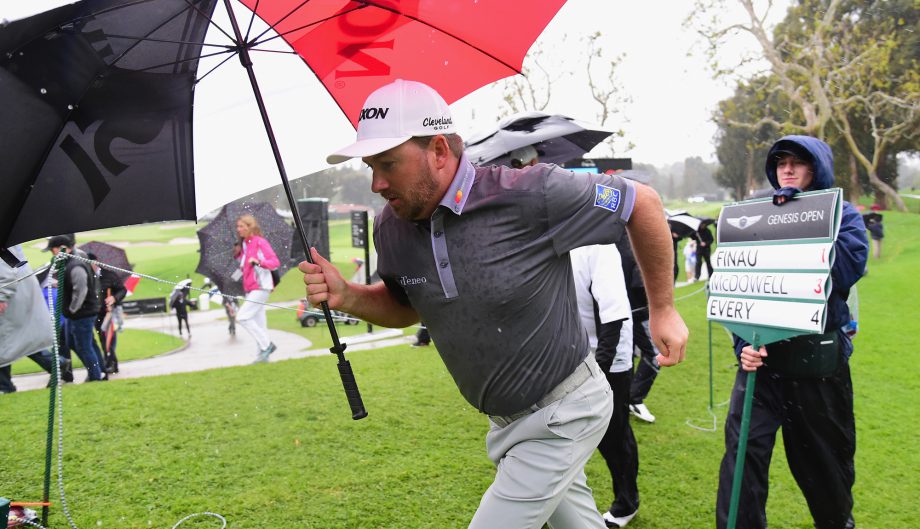 LOS ANGELES – Wind, rain and the snap of a large tree limb were enough to stop play Friday in the second round of the Genesis Open.

Sam Saunders remained atop the leaderboard without ever hitting a shot Friday at Riviera.

But it was the crack of a eucalyptus tree that made PGA Tour officials sound the horn to get players – and spectators – off the course.

“We could have played a little bit more, but why? It’s going to get nothing but worse,” said Mark Russell, the PGA Tour’s vice-president of competition. “We wanted to get them out of there when the trees started snapping.”

No one was hurt, although Russell said he heard some spectators had to scramble to safety when the eucalyptus limb fell some 30 yards behind the third green.

It was tough on a few players, too, at least between the ears.

Hideki Matsuyama, who had a mathematical chance to reach No. 1 in the world this week with a victory, returned Friday morning to complete the first round and made three straight birdies for a 68. He likely will have to finish with three straight birdies Saturday just to make the cut. Matsuyama was 6 over through 15 holes on his second round, and 3 over for the tournament.

Defending champion Bubba Watson hasn’t had much go his way this week, even when they do. He couldn’t decide on a club at No. 5 and came up well short of the green, only to chip in for a birdie. Standing on the tee at the par-3 sixth, with a bunker in the middle of the green and the pin left and to the back, Watson jokingly lamented, “The one time I don’t want to hit first.”

He still had two holes to play and was 8 over, virtually assured of missing the cut.

Mackenzie Hughes of Dundas, Ont., was the lone Canadian to start his second round. He played 14 holes and is 5 over for the event.

Cameron Percy of Australia was among 24 players who finished his second round. He shot a 71 and was at 5-under 137. Zac Blair and Martin Laird each shot 68 and were finished at 4-under 138.

Graeme McDowell birdied three of his last eight holes for a 70 and was at 3 under, along with Daniel Summerhays (73) and Keegan Bradley (70).

Very much in the mix was Jordan Spieth, playing in the same group as Watson. He was the last to hit on No. 6 and had no idea what was going on when he hit his shot .

“Oh, don’t go that way,” Spieth said as the wind failed to bring it back to the right toward the green.

“No way. No way,” he said when his shot appeared to go well beyond the bunker to the left of the putting surface.

And then he heard a smattering of cheers.

The shot landed on a hill beyond the green, rode the slope back down to about 10 feet and he wound up with a birdie. He was at 5 under with two holes to play, and depending what the weather has in store, that might not be a bad place to be.

Spieth, coming off a victory at Pebble Beach last week, was headed for his 19th consecutive round under par on the PGA Tour.

“We knew it would be interesting today, and last week actually was great prep for it because we played through conditions like this that first round,” Spieth said. “Things aren’t going to always go your way on a day like today. Actually, rarely they’re going to go your way. … Tough break on this wave, but that happens, too. Go out tomorrow and play a strong last couple of holes and see if we can take advantage this weekend.”

Still to be determined was whether the rain _ and any debris _ would allow the second round to resume at 7 a.m. Saturday. Ideally, the second round would end in the mid-afternoon, making it still possible for 72 holes by Sunday.

Among those who didn’t play on Friday was Dustin Johnson, who opened with a 66. He needs a victory to have a chance to reach No. 1, depending on how Jason Day fares. The world’s No. 1 player was at 2 under for the tournament with three holes to play.

Day already had one highlight. He began his second round on No. 10, and his drive was so far to the right that it was in front of the temporary green, leaving him no shot except to bounce it up the narrow strip of turf separating two bunkers. He pulled it off perfectly, the ball stopped 8 feet away and Day walked off with a birdie.