Reed cards a 63 at the Hero World Challenge, trails leader Spieth by 3 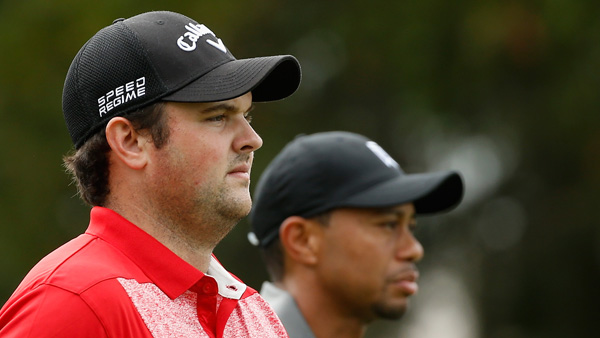 WINDERMERE, Fla. — The guy in a red shirt put on quite a show Friday in the Hero World Challenge to get into contention.

That was Patrick Reed – and Tiger Woods watched it all.

Reed, playing alongside Woods at Isleworth, was 8 under through 10 holes and wound up with a 9-under 63 in the second round, which was delayed 90 minutes by heavy rain. Jordan Spieth elected not to finish his round in darkness, mainly because he had a tough chip short of the 18th green and couldn’t see the flag from 30 feet away.

Spieth was at 11 under, two shots ahead of Henrik Stenson, who had a 68.

Reed was another shot back, along with Justin Rose.

He became the third player this year to shoot a 63 while playing with Woods.

“I never played with Tiger before, besides a practice round at the British,” Reed said. “It was good to finally be able to play with him, especially in competition. It was a lot of fun. We had a good time. I felt like we enjoyed ourselves out there, and luckily I played well.”

Woods was better that his opening 77, except for a sour ending because of another flubbed chip.

But after the rain, Woods had mud on his ball in the fairway and could only smile as it sailed left and long of the green. What followed was another bad chip – that’s six already in two rounds – that traveled only about 10 feet. He wound up with a double bogey for a 70. He remained in last place, 14 shots behind Spieth.

“It’s not very good,” Woods said of his short game.

The best golf in the group came from Reed, who grew up trying to pattern his game after Woods, even down to the wardrobe. He always wears black trousers and a red shirt on Sunday, the ensemble Woods has made famous on his way to 79 PGA Tour wins and 14 majors. Every now and then, Reed likes to wear black and red on Friday.

This was a good time for that.

Reed wasn’t even sure he would be in the tournament until Jim Furyk withdrew last week. And if there was ever a time to get excited about opening with a 73, this would be the occasion. It meant Reed would be paired with Woods, in the first group out.

Reed opened with three straight birdies. He rolled in a 40-foot eagle putt on the seventh, and he went out in 29 after making a 15-foot birdie putt at No. 9.

After his 7-foot birdie putt at No. 10, Reed even began “thinking in the 50s,” though that ended quickly. With a sand wedge from the rough, his ball came back off a hill behind the 12th green with so much steam that Reed begged it to “hit the microphone.” That would have been the only thing to keep it from rolling into the water, and it missed. He made bogey.

Rory McIlroy shot a 63 with Woods in the opening round at Dubai this year (Woods shot 68). Spieth played with Woods at Torrey Pines and shot 63 on the North Course (Woods shot a 71).

Woods is playing for the first time since Aug. 9 at the PGA Championship. He took nearly four months off to strengthen his muscle structure, and during the time away, he hired a new swing coach.

His swing looks fine. His short game does not.

And that’s why Reed didn’t read too much into a seven-shot advantage over Woods in their first pairing.

“He had a couple of loose shots here and there, but he knows what he’s doing,” Reed said. “When was the last time he played a competitive tournament? It’s been awhile.”

That’s not the case for Spieth or Stenson.

Spieth won by six shots last week in the Australian Open. Stenson won the World Tour Championship in Dubai the week before.

“You’re not winning anything on Friday,” he said. “We’re still at the races.”

And that’s what the final hour resembled – a race.

With the rain delay, it was a push for everyone to finish.

Spieth figured the horn would have sounded when he was on the 16th hole in a regular tournament. They pressed on, but when his approach to the 18th came up just short, caddie Michael Greller talked him out of playing a delicate chip into the grain with a muddy lie.

“It was a good idea to hit that pitch tomorrow,” Spieth said.