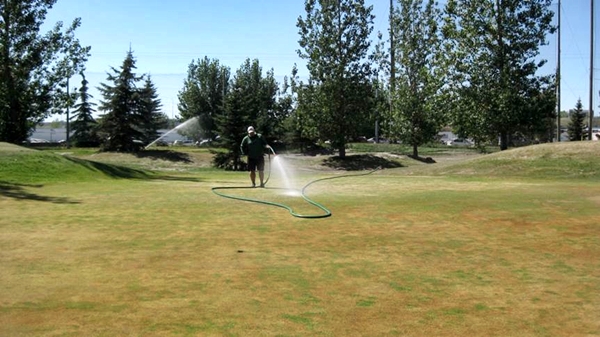 The 2013 flooding of the Greater Calgary Area had the city fighting to get back on its feet. Among the thousands of citizens and local businesses affected include the top-ranked facilities at the Golf Canada Calgary Centre.

Following three days of flooding, insurance agents estimated the damage to the 15 acre property at $2.3 million. The driving range was fully submerged. The mini-putt course was deemed unrecoverable. The 500 square foot irrigation was destroyed. The list goes on.

Much like the rest of the city, the folks at Golf Canada’s Calgary Centre showed their resilience turned this disaster into an opportunity.

With the help of volunteers and CDT International, the Calgary Centre staff focused their efforts towards following an emergency disaster restoration plan.

Chad Rusnak, Director of Golf Operations at the Calgary Centre, is optimistic about the revival process and is eager to begin servicing the golf community again.

“Calgary golfers are flocking to the range to get a jump start in preparation for the 2014 golf season and you cannot put into words how delighted we are to see the return,” said Rusnak. “It truly is exciting to welcome our customers back and share the newly renovated clubhouse and our recent flood diverted traffic of loyal facility patrons.”

Still buried in paperwork, Rusnak and his team are hoping to have the revamped facility fully operational for the summer season. Currently, the driving range and pro shop are open for business, with the 9-hole, par-3 course set to open in the couple weeks.

“The golf centre plans to honour and provide a credit to all 2013 registrants in our leagues and Girls’ Club based on a pro-rated registration fee to off-set the shortened season in 2013,” stated Rusnak. “We intend to address and pay added attention to re-instating the standards and conditions of the golf course.”

As the healing from the 2013 floods continue, the team at the Calgary Centre is planning a  grand re-opening of the facility in early May – another example of Calgarians showing their resilience in what has been an extraordinary past year.