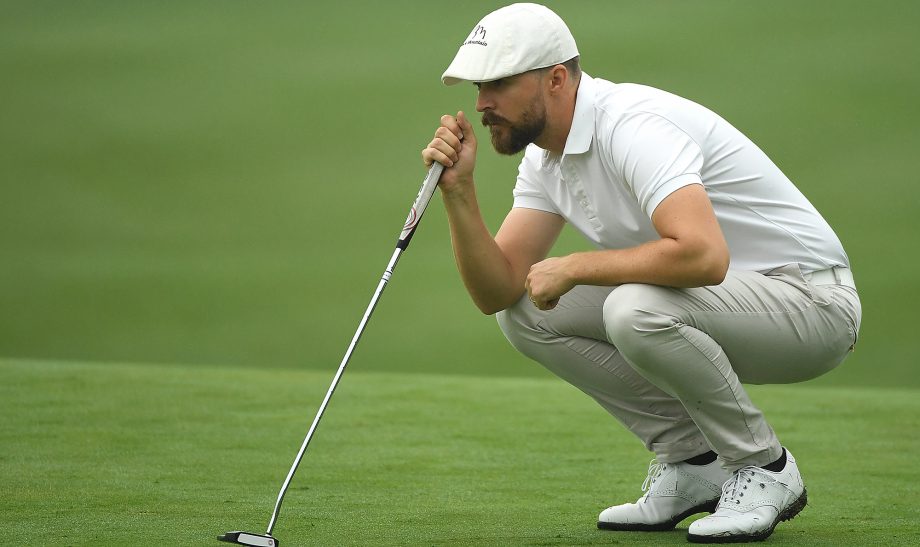 SHANGHAI – Rikard Karlberg made his World Golf Championships debut with an 8-under 64 on Thursday to take a one-shot lead over Rickie Fowler in the HSBC Champions.

Karlberg has only faced a field this strong twice before in the British Open, both times missing the cut. He wanted to treat this like any other event, and on a soggy Sheshan International course, he made it look easy.

Karlberg was 9 under through 16 holes and challenging the course record when he came up short on the par-3 17th, nearly in a hazard, and managed to save par. He wasn’t so fortunate on the par-5 closing hole after driving into a bunker. He caught too much sand, couldn’t reach the green with his third and took his only bogey.

“It felt amazing, every part of the game,” he said. “Everything was so easy. It was just one of those days, a walk in the park.”

It was a wet walk. The course was soaked with 5 inches of rain over the weekend, another downpour on Wednesday cut short the pro-am and most of the opening round was played in a light rain that make the greens bumpy toward the end of the round.

Fowler, in his first competitive round since the Ryder Cup, holed a 15-foot birdie putt on his final hole for a 65 that had him thinking about an HSBC sweep. He won the Abu Dhabi HSBC Golf Championship in January, so far his only victory this year.

Fowler was particularly efficient on the par 5s, reaching two of them in two shots for eagle chances and leaving a simple up-and-down on the 14th hole for another birdie. He also chipped in from just off the green on the 17th.

Fowler was at PGA of America headquarters in Florida for the official arrival of the gold Ryder Cup trophy (he also accompanied it to Arnold Palmer’s memorial service). And while the buzz of winning is starting to wane, he rode some of that momentum into China.

Fowler had never won a Ryder Cup match until teaming with Phil Mickelson in a fourballs victory in the opening session at Hazeltine. He also beat Justin Rose in singles, and while it was a team victory, it felt like more.

“For me, finding a way to get a win in a singles match was big,” Fowler said. “It’s a team victory, but I felt like I did my part to help the team. Coming out of that with a 2-1 record instead of 1-2 was important to me.”

He didn’t see another golf course for two weeks until getting back to work last week in Florida, determined to clean up his tee-to-green game, and that’s what carried him in the first round of the HSBC Champions.

That wasn’t the case for U.S. Open champion, who hit only seven fairways and wasn’t able to use his length in soft conditions to attack the par 5s. Johnson also missed a couple of short birdie chances early and finished with only one birdie in a round of 74.

Scoring wasn’t a problem for so many other players.

Knox played in the group with Fowler and Paul Casey, and they combined to make 16 birdies and an eagle. Knox, Daniel Berger and Hideki Matsuyama were at 66, while Casey joined Bill Haas and Francesco Molinari were at 65. Nineteen players in the 78-man field broke 70.

Rory McIlroy wasn’t among them. He made only two birdies, dropped a shot on the 18th and had to settle for a 71.

As great a round as Karlberg played, it was a quiet one for the Swede. He said there only a dozen or so people watching, and the Chinese gallery was so quiet that there were times he didn’t know how close he had hit it because no one cheered.

“They are a bit quiet when it comes to if they should applaud or not, especially I think a guy as me who shows up that is not one of the ‘super heroes,”’ he said with a smile, referring to the HSBC Champions promotion of top players. “We hit a few shots that were just spot on, and I looked at my caddie … ‘Is that long or short?’ I don’t know, they were a little scared to applaud you.”

He at least has experience in these parts. Karlberg played the Asian Tour for five years before getting his European Tour card, and he has a good understanding of the greens, putting aggressively on them.