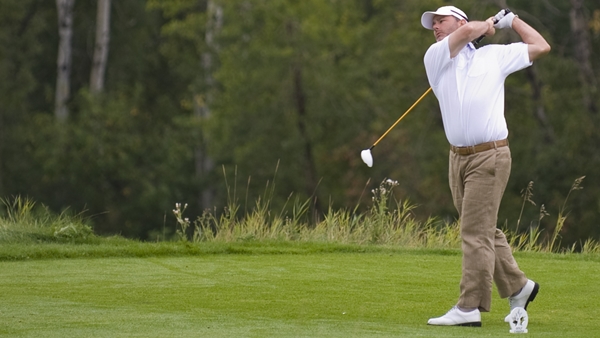 BARRIE, Ont. – Rob Couture took control of the Canadian Men’s Mid-Amateur Championship after a 2-under 70 at Barrie Country Club on Tuesday.

“[The golf course] is very good, it’s the kind of golf course that if there wasn’t any wind you could certainly make a lot of birdies and shoot a good score but especially in wind like this anything under par is a good round,” Couture said. “The greens get quick, you can certainly get in the wrong spot and there’s not much you can do to two putt in some areas.”

The Dallas, Texas native made five birdies during the opening round and closed with a clutch par save on the par-5 18th to finish atop the leaderboard heading into Wednesday’s second round.

“I putted well, I didn’t get off to a great start, I bogeyed No. 2 from 95 yards in the middle of the fairway but then I chipped in on No. 4 off the front of the green for birdie to get back to even,” Couture said of his turning point on course. “That’s kind of something that can change things a little bit so that was good and from there on I played pretty solid.”

Carrigan and Jones currently trail Couture by a stroke after opening with a pair of 1-under 71’s. Jones birdied the difficult par-4 17th on his closing nine to grab the lead in the Mid-Master race by two strokes over Toronto’s Dennis Kavelman, Calgary’s Kevin Temple and Paul Coulson of Biblehill, N.S.

In the Inter-Provincial team competition, the Team British Columbia contingent of Kevin Carrigan, Patrick Weeks and Sandy Harper leads by two strokes over Team Alberta after carding an even-par 144.