Rose opens with 65 to tie Pebble record at US Open; Weir and Taylor nine shots back 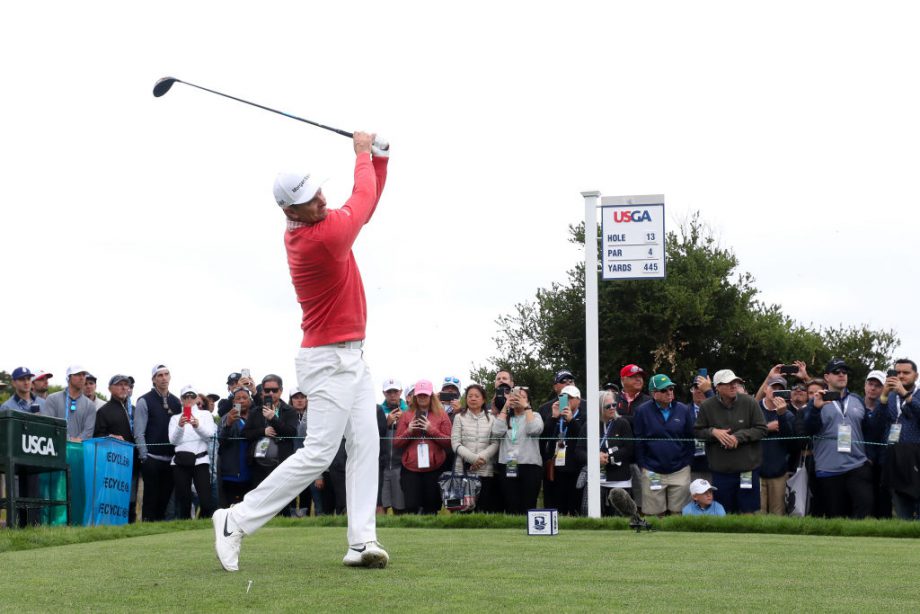 PEBBLE BEACH, Calif. — Justin Rose played alongside Tiger Woods, and then joined him in the U.S. Open record book at Pebble Beach.

In a gentle start to the toughest test in golf, Rose birdied his last three holes Thursday for a 6-under 65, giving him a one-shot lead on a day so accommodating that more than three dozen players broke par.

It was an ideal start for Rose and for the USGA, which wants a smooth ride after four years of various mishaps in the U.S. Open. The idea was to start safe and make the course progressively more difficult, and a forecast of dry weather for the week should make that easier to control.

This was the day to take advantage, especially with a cool, overcast sky for most of the day.

Rose knew what was at stake when he blasted out of a bunker short of the par-5 18th to about 12 feet. He was watching the telecast earlier when Rickie Fowler had a birdie putt for a 65 to tie the lowest U.S. Open round at Pebble Beach, set by Woods in the first round of his record-setting victory in 2000.

“I was thinking, ‘This would be kind of cool doing it front of the great man himself,”’ Rose said.

He lightly pumped his fist, partly for the record, mainly for the best start.

Fowler had to settle for a 66, tied with Aaron Wise and two others who had big finishes. Xander Schauffele caught a break when his tee shot on the 18th caromed off the rock edge of the left fairway, setting up a 12-foot eagle. Louis Oosthuizen finished on No. 9 by holing a bunker shot for a birdie. It felt almost as good as the wedge he holed from 95 yards for eagle on No. 11.

Woods took advantage of the scoring holes with three birdies, but there was one blunder _ a tee shot he hooked on the par-3 fifth that smacked off the cart path into gnarly, deep grass some 20 yards behind the edge of the bleachers. He blasted that out beyond the green and made double bogey.

After two straight birdies, he finished with 11 straight pars for a 70.

“Pebble Beach, you have the first seven to get it going, and after that it’s a fight,” Woods said. “I proved that today. I was trying to just hang in there today. Rosey proved the golf course could be had.”

Two-time defending champion Brooks Koepka proved the opening holes could be had. He was 4 under with his birdie on the par-5 sixth hole and appeared to be on another major mission until a few errant tee shots into nasty rough, a few missed putts and a few bogeys. Even so, he had few complaints about his 69 to begin his bid for a record-tying third straight U.S. Open.

“I didn’t shoot myself out of it,” Koepka said. “I’m right there. I feel like if I get off tomorrow to a good start, I’m right back into it.”

Phil Mickelson, in another U.S. Open quest to complete the career Grand Slam, didn’t feel he was out of it either, despite only two birdies in his round of 1-over 72, which included a 22-inch par putt that he missed.

Woods also had a one-shot lead when he had his opening 65 in 2000, a lead he stretched to six shots after the second round, 10 shots after the third and 15 shots at the end, a record for major championships.

But only 17 players were under par in the first round of 2000. For this U.S. Open, in these relatively soft conditions, 39 players broke par.

Perhaps more telling about the course, and depth of talent compared with two decades ago, there were 17 eagles. That’s the most for any round at any U.S. Open, breaking the record of 13 set in 1983 at Oakmont. The eagles included Callum Tarren holing out from a bunker on No. 10, the hardest hole at Pebble, and Rory Sabbatini making a hole-in-one on No. 12.

No one was expecting a breeze the rest of the week.

“It’s a very soft start to a U.S. Open, which is a good thing,” Rory McIlroy said after a 68, his first sub-70 round at the U.S. Open since he won at Congressional in 2011. “They can do whatever they want with from here. It’s not as if you’re starting with a course that’s in the condition like a Sunday, and then you get three days and it sort of starts to get away from you.”

Scott Piercy, who bogeyed the 18th for a 67, was the first player to get everyone’s attention when he was at 5 under through six holes.

Graeme McDowell saw the score when he walked off the 10th green at the start of his round and quipped to his caddie, “All the USGA radios are going off and they’re saying, ‘Turn off the water – NOW!”’

McDowell won the last U.S. Open at Pebble Beach in 2010 when it was so difficult he made only one birdie in the final round and no one broke par for the week. Even as he saw low scores on the board _ he had a bogey-free 69, one of 27 rounds in the 60s _ McDowell feared what was to come for those falling into a comfort zone.

“Careful what you wish for, because I think we’re going to see it come the weekend,” McDowell said.

“I don’t think level par wins this week,” he said. “Careful what you wish for, because I think we’re going to see it come the weekend.”

For one day, Pebble Beach was paradise.

“I wouldn’t say it’s exhilarating, because I feel like my mindset is I am in a 72-hole tournament,” Rose said. “This is just a very small step toward outcome. So you don’t feel that buzz that you would on a Sunday, but you can’t help but look around over your shoulder and … damn, this is Pebble Beach. Shot 65 and you’re in the U.S. Open. It’s a cool moment. Whatever transpires the rest of the week, it was a cool moment.”

Canadians Mike Weir and Nick Taylor opened with rounds of 74.