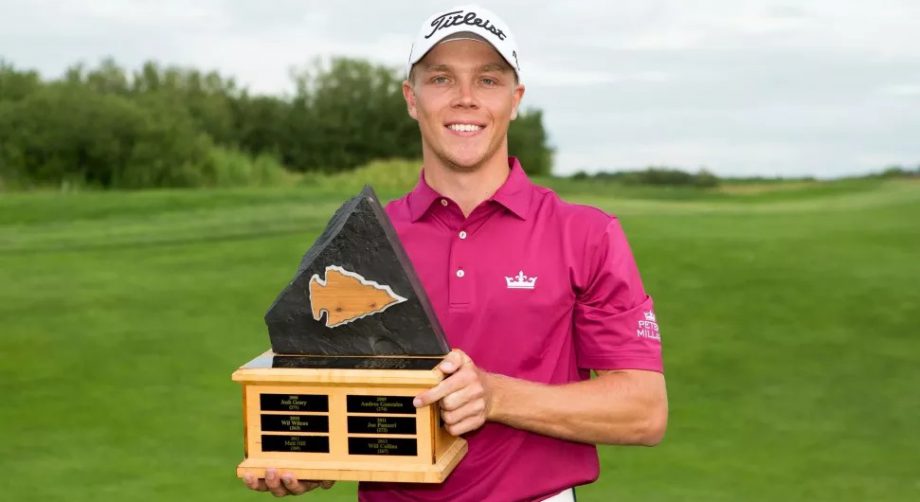 The 23-year old Arizona State University grad finished at 23-under par for the week to win by one over North Carolina’s Carter Jenkins. The win comes in Rottluff’s third start as a professional.

“To win in my third start after missing the first two cuts, that was certainly not on the radar and came unexpectedly,” said Rottluff. “I haven’t had the year that I was hoping for, but coming out with the win today gives me a lot of confidence. It’s a huge boost.”

Rottluff and Jenkins began the day with a share of the lead and 35 holes to play in the tournament due to delays from Saturday’s thunderstorms. After play resumed at 8 a.m. the pair – who played together for every round of the tournament – concluded round three with identical rounds of 67-65-67 to sit tied at 17-under through 54 holes.

“It was fun playing with Carter. We were just throwing those birdies at each other, and I’m sure if we weren’t paired together we wouldn’t be where we are right now. It was fun,” said Rottluff.

With four holes to go, the stalemate had yet to be broken, but after Jenkins bogeyed the par-3 15th, Rottluff took control by giving himself birdie opportunities at each of the last three holes. His birdie at the par-5 16th pushed the leading score to 23-under, and after Jenkins was unable to convert long birdie putts on the 17th and 18th, Rottluff two-putted his way to victory.

Rottluff benefited all week from the support of his girlfriend and caddie Emily Collins, a professional golfer herself who plays on the Symetra Tour.

“She was great. She’s a great player herself, and reading the greens she helped me a lot. I should listen to her a little bit more,” said Rottluff with a smile.

With the victory, Rottluff moves to third place on the Order of Merit through four events, in position to earn Web.com Tour status for 2017.

“I’ve set goals to make it through the Mackenzie Tour on to the Web.com Tour. That’s the goal for a lot of guys out here, but for me to get the win in my third pro start is huge, especially after missing the cut the first two weeks,” said Rottluff.

Two shots behind Rottluff in solo third was Calgary, Alberta’s James Love, who came into the week without Mackenzie Tour status but earned conditional membership for the remainder of the year by being one of the top three non-members on the Order of Merit through four events.

With a total score of 20-under par in solo second place, Calgary’s James Love finished as the top Canadian on the leaderboard, earning Freedom 55 Financial Canadian Player of the Week honours and a $2,500 prize.

CHASE FOR THE FIVE

With a T8 finish on Sunday, Dan McCarthy extended his spot atop the Order of Merit, earning $5,075 for the week. Below are the top five players through two events (bold denotes Canadian):