Round 2 at LPGA Thailand washed out 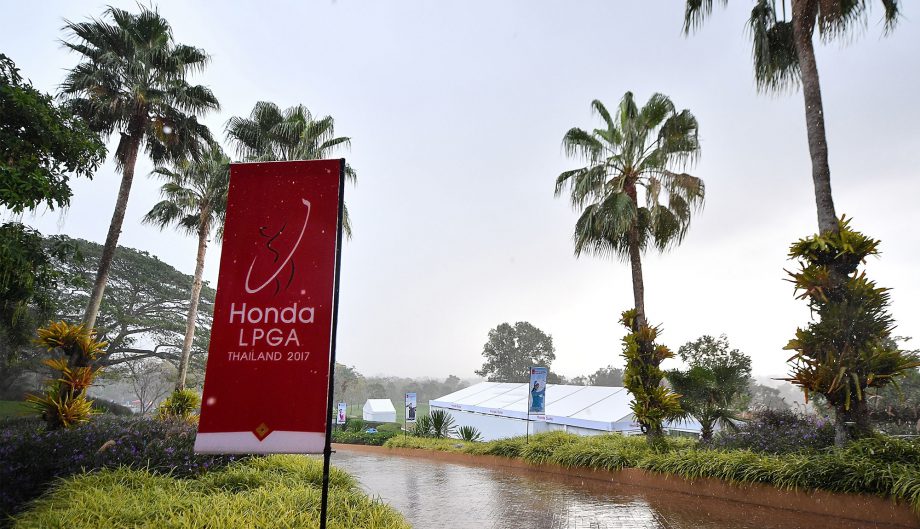 Play at the Honda LPGA Thailand was called at due to unplayable course conditions brought on by severe weather at the Pattaya Old Course.

“We were hoping we could get out and play some more golf. All four of us (LPGA Rules Officials) went out and looked, and there is just too much of a mess out there to be able to go and play today,” said LPGA Vice President of Rules and Competition Sue Witters. “It’ll take them a long time to restore the bunkers and pump the water out. We’re not going to play anymore today, and we’ll resume play at 7:00 tomorrow to finish round two.”

The second round got underway at 9:38 a.m. but was delayed at 11:24 a.m. local time due to inclement weather in the area. Players returned to the course at 12:19 p.m. after a 55 minute delay but were quickly pulled off the course again at 12:39 p.m. when the storms returned.

The final group of Ariya Jutanugarn, Amy Yang and Sei Young Kim did not tee off while the penultimate group of Minjee Lee, Ryann O’Toole and Shanshan Feng only hit their tee shots on the first hole before being called in.

Jutanugarn and Yang continue to lead at 6-under with Lee, O’Toole and Feng a shot back. Also a shot back are Danielle Kang and Cristie Kerr who both birided the par-5 first hole.

Ha Na Jang had the low round on the course at 3-under through eight holes to move into a tie for ninth at 4-under par.

Second round competition will resume at 7 a.m. tomorrow. Projected round three starting times will be 10:30 a.m. – 12:42 p.m.. Players will remain in their round two pairing for round three.