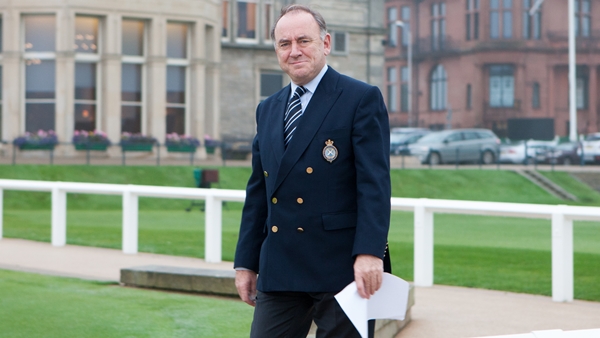 The Royal and Ancient Golf Club at St. Andrews is no longer just for men.

The R&A became the latest golf club to end years of male-only exclusivity on Thursday when its members voted overwhelmingly in favor of inviting women. The vote was effective immediately.

“I can confirm that The Royal & Ancient Golf of St. Andrews is now a mixed membership club,” R&A secretary Peter Dawson said in a statement.

Dawson said more than three-quarters of the club’s 2,500 members worldwide voted, with 85 percent in favor. It was the first time in the R&A’s 260-year history that members were allowed to vote by proxy at the annual business meeting.

The members also voted to fast-track a “significant” number of women to join in the next few months. The R&A did not say how many women would be invited, though previous reports indicated it could be as many as 15.

“This is a very important and positive day in the history of the Royal and Ancient Golf Club,” Dawson said. “The R&A has served the sport of golf well for 260 years and I am confident that the club will continue to do so in future with the support of all its members, both women and men.”

Augusta National, home of the Masters, decided two years ago to invite women to join. Unlike the R&A, Augusta National did not have a written policy that banned women. Former Secretary of State Condoleezza Rice and South Carolina financier Darla Moore were the first female members.

While the R&A members have access to the clubhouse behind the first tee at the Old Course, they belong to a club, not a golf course. The seven golf courses at St. Andrews are open to the public.

The favorable vote was hailed from golf organizations, public officials and sponsors around the world.

“This is positive news for the sport, and I hope we will now see other golf clubs that still have outdated same-sex policies follow suit,” said Helen Grant, Britain’s minister for sport. “With golf in the next Olympics there is a huge opportunity for the sport to grow and this sends out the right inclusive message that golf is for everyone.”

The Royal & Ancient governs golf everywhere in the world except for the United States and Mexico. It is separate from “The R&A,” a business arm created 10 years ago to handle the Rules of Golf, organize the British Open and operate other business affairs. But while the R&A has female employees, the committees and board are populated by club members, so there had been no women in leadership roles governing the game or running championships.

The R&A was coming under increasing pressure when The Open was held at all-male clubs, most recently Muirfield in 2013. Even some of its sponsors were getting uncomfortable with the centuries-old policies barring women.

“As a partner of the R&A and a long term international sponsor of golf, we welcome this news with open arms,” said Giles Morgan, HSBC’s global head of sponsorship and events. “HSBC is committed to growing the game at all levels and fundamental to this is our commitment to the value of diversity and our support of women’s golf, which is a cornerstone of our global golf portfolio.

“We look forward to continuing this successful partnership at St Andrews in 2015 for what promises to be the start of a new era.”

The Women’s British Open has been played at St. Andrews twice since 2007, and they were allowed in the clubhouse during the championship.

“The LPGA is happy to hear that the members of the Royal & Ancient Golf Club in St. Andrews have voted to include female members,” the LPGA Tour said in a statement. “This decision is certainly a step in the right direction and one that better captures the current diversity and inclusiveness of our great game.”

Here’s the full statement from Dawson.

I am very pleased indeed to announce that the membership of The Royal and Ancient Golf Club of St Andrews has voted overwhelmingly in favour of welcoming women members.

More than three quarters of the club’s global membership took part in the ballot, with a decisive 85% voting for women to become members.

This vote has immediate effect and I can confirm that The Royal and Ancient Golf Club of St Andrews is now a mixed membership club.

The membership has also acted to fast-track a significant initial number of women to become members in the coming months.

This is a very important and positive day in the history of the Royal and Ancient Golf Club. The R&A has served the sport of golf well for 260 years and I am confident that the club will continue to do so in future with the support of all its members, both women and men.