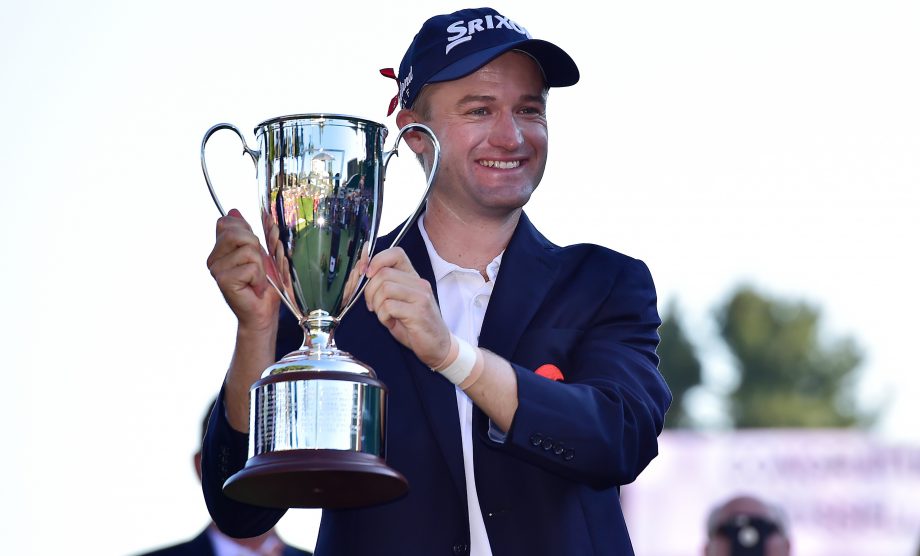 He doubled down on that Sunday after sinking a 12-foot putt on the final hole to save par and beat hometown favourite Jerry Kelly by a stroke Sunday, hours after Jim Furyk shot the first 58 in PGA Tour history.

“I felt like the Incredible Hulk when it went in,” Knox said. “I could have ripped my shirt off.”

Knox closed with a 2-under 68 for a 14-under 266 total at TPC River Highlands. The 31-year-old Scot won for the second time on the tour, following his breakthrough victory in China in November in the World Golf Championships-HSBC Champions.

Kelly, the 49-year-old former University of Hartford player, finished with a 64.

Knox opened with consecutive 67s and had a 64 on Saturday. He took the lead with birdies at 13 and 14. He bogeyed the par-3 16th, and missed a chance to seal it on the par-3 17th when his 20-foot birdie putt stopped an inch right of the hole.

The Scot hit his tee shot on the par-4 18th right and into the crowd, and his second shot into a green-side bunker below the hole. He pitched out short of the hole, setting up a putt that went straight into the hole. He didn’t tear his shirt off, but did send his hat flying in celebration.

“Everybody dreams of making a putt on the last hole to win a tournament,” he said. “I just kept telling myself, this is your chance to make a putt to have a great celebration and hear the roars. I’m glad it went in.”

Justin Thomas was almost an afterthought despite shooting a 62 and stringing together five straight birdies to close out the front nine. He finished with nine birdies on the day and at 12 under for the tournament, tied with Patrick Rodgers for third place. Rodgers shot a 68.

Furyk, already one of six PGA Tour players to shoot 59, took advantage of soft, clean greens during the morning after Saturday afternoon rains.

The 46-year-old American bounced in an eagle from 135 yards on his third hole, ran off seven straight birdies around the turn and picked up his final birdie on the 16th hole with a putt from just inside 24 feet.

He rolled in a short par putt on the final hole, thrust his arms in the air and waved his cap to salute thousands of fans who had rushed to the amphitheatre around the 18th green to catch a stunning slice of history.

“No one else can say they’ve done that out here on the PGA Tour,” he said. “It’s really special.

It was tougher for the leaders in the afternoon.

Daniel Berger, who shot a 62 on Saturday, began the day at 15 under with a three-stroke lead. But he struggled, making four consecutive bogeys to start his back nine. He finished with a 74 to tie with Furyk, Robert Garrigus and Tyrone Van Aswegen at 11 under.

Kelly began the day at 7 under. He shot 32 on the front nine, then went to 5 under for the day when his second shot on the 13th hole found the cup for an eagle from 113 yards. Headed to the PGA Tour Champions in November, he acknowledged the fans were chanting “Jerry! Jerry!” by pounding his heart with his fist as he walked up the 18th fairway.

Kelly won the last of his three PGA Tour titles in 2009.

Knox made back-to-back birdie putts inside 7 feet after great approach shots on 13 and 14. After a par on 15, he just missed the water by a few inches with his tee shot on 16. He bounced his next shot over the hole and had to settle for a bogey, before surviving the final two holes.

Patrick Reed had the best tournament of the three members of the U.S. Olympic team, shooting a 66 on Sunday to finish at 9 under. Matt Kuchar finished with a 65 and was 8 under, and defending champion Bubba Watson followed at 7 under after a 68.

“It was one of those weeks where you could easily see playing great next week or the week after,” Watson said, before getting on a plane for Rio de Janeiro. “Next week might help me get even further in the right direction or it could happen next week.”