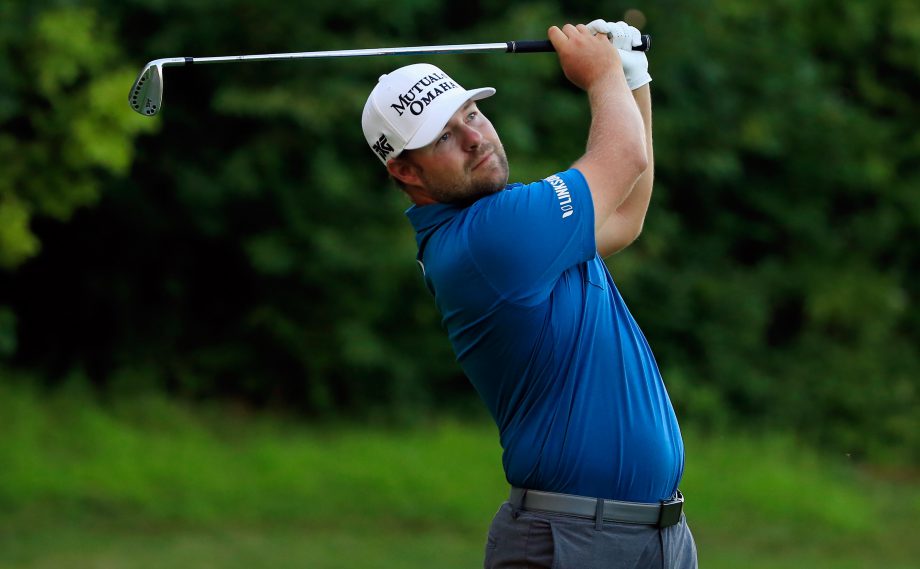 SILVIS, Ill. – Ryan Moore shot two more rounds of 6-under 65 on Saturday to take the third-round lead in the John Deere Classic, finishing at 8:25 p.m. in nearly dark conditions.

After opening Thursday with a 65, Moore barely got on the course Friday in the tournament that finally got back on schedule Saturday when the players raced to finish before dark.

“It was a long day, Moore said. It was a lot of golf holes I played today, so to play that solid all day long, I’m very encouraged about it. I think that was 34 holes I played today. It will be nice to get to sleep a little bit tomorrow and be well rested and just ready to get after it again tomorrow.”

Play was delayed 3 1/2 hours Thursday when an inch of rain fell, then the start was delayed five hours Friday after an overnight storm dumped another 2.4 inches on the soaked course.

Morgan Hoffman and Ben Martin each shot 62 to pull within a stroke at 17 under.

The 33-year-old Moore has four PGA Tour victories, winning the CIMB Classic in 2013 and 2014. He was third in March in the Valspar Championship and has five top-10 finishes this season.

In the third round, Moore birdied the par-4 14th, hitting a 60-yard approach to a foot, and made a 6-foot birdie putt on par-3 16th. He parred the final two holes, putting out on the par-4 18th with a large scoreboard providing just enough light to see.

“There actually was plenty of light for the tee shot and the second shot,” Moore said. “I think we would have gone a lot faster on the green there if it wasn’t for that giant sign there that kind of lit it up. We could actually see just fine around the green and went ahead and played as normal from there. I think we would have finished one way or another.”

Hoffman had six straight birdies on Nos. 11-16 and parred the last two. He’s winless on the PGA Tour.

“It is really dark, and the last few greens are getting really soft and bumpy, too, so it was hard to read,” Hoffman said. “I guess they’re running in right now.”

Martin birdied the first five holes and four of the last five, chipping in for birdie on the par-4 18th. He won the Shriners Hospitals for Children Open in October 2014.

“It was one of those days where all the putts were going in,” Martin said. “It would have been nice to get the first five and the last five, but strong start, strong finish.”

Johnson Wagner was fourth at 14 under after a 67.

Wesley Bryan, the leader Friday when play was suspended, was tied for fifth at 13 under after a 70. He earned a PGA Tour card last week with his third Web.com Tour victory of the year.

NCAA champion Aaron Wise was 11 under after a 63. Making his PGA Tour debut as a pro, the former Oregon player won a PGA Tour Canada event two weeks ago in Edmonton, Alberta.

“This is pretty hard today.” Stricker said. “It’s wet. It’s tough to control your ball out of the fairway. If you hit it in the rough, it’s thick and lush. So you have to be in the fairway. But even out on the fairway, it’s hard to control it because the fairways are wet. We’re lucky to be playing. The course took a lot of rain. It’s still in great shape, but it’s tough.”

Zach Johnson shot 71-71 to remain at 6 under. The 2012 tournament winner and two-time major champion is from nearby Cedar Rapids, Iowa.

Jordan Spieth chose not to defend his title because he didn’t think it would be appropriate in light of his decision to skip the Rio Olympics.